It seems like sine resonance track and dwell (SRTD) testing should be fairly straightforward. You run a sine sweep, find a resonance frequency, and then dwell on that frequency for a pre-determined time or until the device under test (DUT) fails.

Sadly, things are not that simple in the real world. Resonance measurement is never fully accurate. More significantly, resonances shift as material fatigues. For the test to be valid, the test frequency also needs to shift. Therefore, an engineer needs insight into these shifts. Ideally, they should also be able to learn the details of multiple resonances, select a resonance for a dwell, and then run the test with confidence that the frequency will stay on the resonance.

This paper begins by examining the nature of shifts in resonant frequencies and the phase relationship between the control channel and the response channel at those frequencies. The discussion then moves to describe the two primary methods for tracking the resonance during a test, phase tracking, and peak tracking.

With this as background, the results for two sets of tests are presented; each set compares SRTD test results using phase tracking with results using peak tracking. Conclusions are made based on the test result comparisons.

An SRTD test begins with a sine sweep across a broad frequency range. The results are analyzed for transmissibility between the control and response data; the peaks in transmissibility identify resonance frequencies; a product experiences the most fatigue when exposed to its natural resonance. The dwell portion of the test can then be initiated, with the shaker frequency controlled to stay on a selected resonance until the product fails. A pre-established threshold of time or number of cycles to product failure determines whether or not the test is successful.

When test engineers originally began performing these tests, they controlled the frequency of the resonance with little concern for the phase difference between the control channel and the response channel at the resonance frequency. There seemed to be some good reasoning for this. Since a resonance occurs when a material’s vibrations are reinforced (constructive interference) by the “reflected” waves in the material, it can be assumed that the ideal phase difference is 90°. Consider a cantilevered beam vibrating in its fundamental mode (Figure 2 and Figure 3); in which the end of the beam is at its peak amplitude while the shaker head is at its equilibrium position. Based on this reasoning, engineers would often set the default phase difference setting for a resonance to 90°. 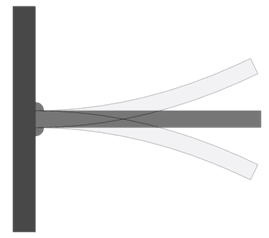 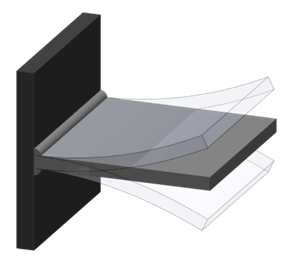 However, the real phase difference may be quite different from this theoretical 90° phase difference. First, the initial phase measurements may be affected by the location of the accelerometer or due to a lag in the reading of instrumentation. Second, the phase differences may shift due to changes in test amplitude or non-linear responses to fatigue. 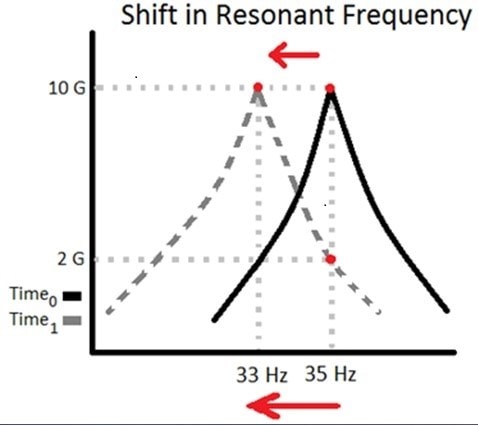 The most common way to adjust SRTD testing for shifting resonance frequencies is Phase Tracking, implemented by the vibration test controller software. At the end of the Sine sweep, the phase difference between the control channel and the response channel at the resonance frequency is measured. As mentioned earlier, the theoretical resonant peak is 90° out of phase. In the real world, the phase difference will usually be close to, but not exactly, 90° because of material imperfections, the mounting locations of accelerometers, and non-linear shaker motion.

Phase Tracking generates an output at the amplitude and frequency selected after the initial sine sweep, presumably the frequency at which peak resonance is occurring on the response channel. The test holds at that frequency until, due to material fatigue, the resonant frequency of the response begins to shift. The frequency of the drive output then shifts to maintain the defined phase difference between the control and response sensors.

Phase tracking for track and dwell tests offers a clear advantage over tests that do not adjust to resonance shifts. However, there are three limitations to the phase tracking methodology.

Peak Tracking is another option for adjusting to resonance shift during the dwell portion of a test. This option allows the controller to adjust both the output frequency and the phase difference between the two channels to maintain peak transmissibility. Phase adjustment works by constantly oscillating the phase difference between the control and the response channels and observing if the transmissibility increases or decreases. The algorithm controlling the oscillations learns the shape of the transmissibility graph and seeks the peak; as the algorithm learns more, the amount of phase change continues to decrease.

Peak Tracking minimizes the need for precise detection during the sine sweep so that users can sweep faster. More importantly, it ensures that peak transmissibility is maintained throughout the dwell portion of the test, even when phase relationships shift along with the resonance frequency. 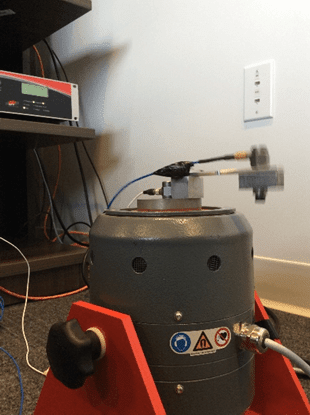 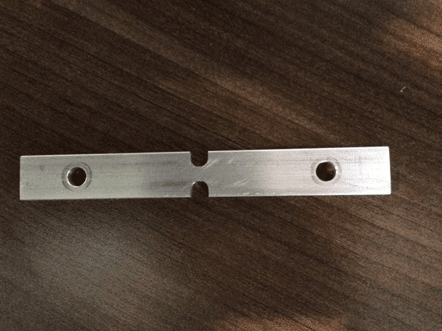 The difference between the effect of Peak Tracking vs. Phase Tracking on the failure times of a product can be shown from experimental results. For this paper, forty SRTD tests were conducted on notched aluminum beams (4in X 0.5in X 0.125in) (Figure 5), twenty using Peak Tracking, and twenty using Phase Tracking. One end of the aluminum beam was attached to a shaker head and a mass hung from the cantilevered end of the beam (Figure 6). A sine sweep of 1G across a frequency band of 60Hz to 120Hz was performed.

The aluminum beam test results are separated into two groups because slightly different procedures were conducted.

I. Sweep rate and direction: 3 Oct/min; sweep down 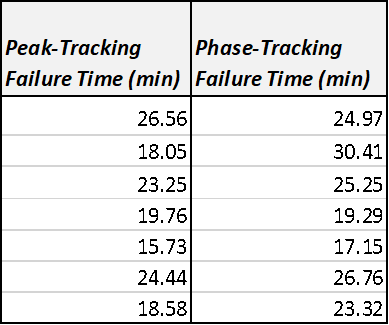 Table 1. Comparison of failure time for a 3 Oct/min sweep down. 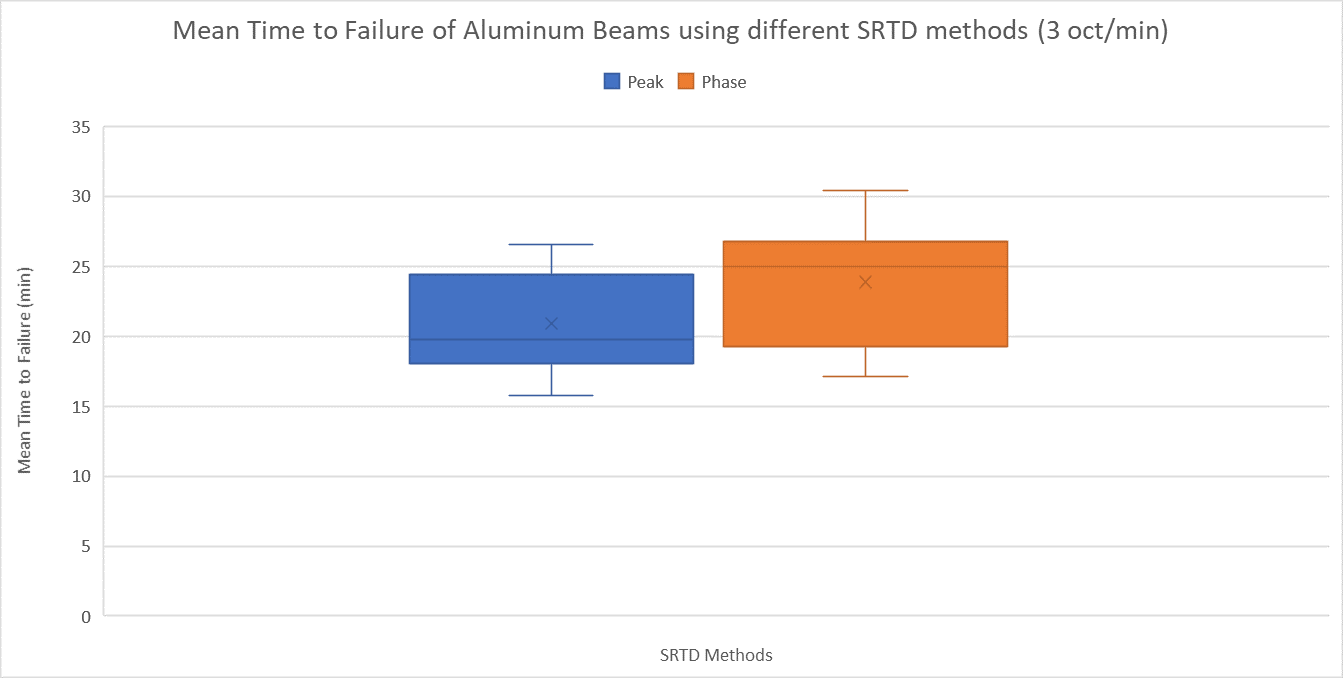 Graph 1. Mean time to failure for a 3 Oct/min sweep down.

26 aluminum beams were tested (13 with phase tracking and 13 with peak tracking). The sweep rate of 6 Oct/min and sweep-up methodology used in this experiment probably did not produce as accurate a resonance frequency and phase value as could have been determined with a slower sweep rate. 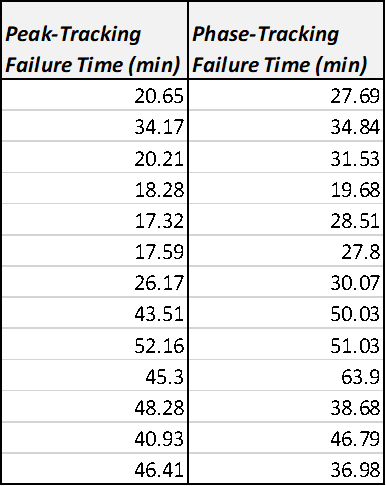 Table 2.  Comparison of failure time for a 6 Oct/min sweep up.

Graph 2. Mean time to failure for a 6 Oct/min sweep up. 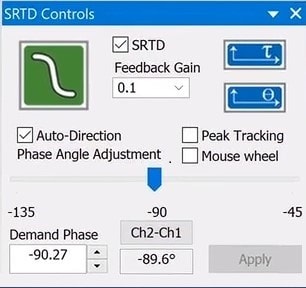 The test results from this simple experiment demonstrate that peak tracking during SRTD testing causes a product to fail faster than phase tracking. In conclusion, test engineers should use peak tracking SRTD when attempting to maintain the dwell portion of a test on a resonance.

To obtain the most precise location of a resonance, a test engineer must be able to adjust for shifting frequencies and shifting phases in a product’s resonance due to the changing characteristics of the product as it fails. Peak tracking SRTD provides the test engineer with the tools to accomplish this. Other SRTD methods only allow one variable to shift, and consequently, the engineer may not be testing at the peak resonance.

VibrationVIEW also supports peak tracking. With this selection, both the phase and the frequency are constantly being shifted to “hunt” for the peak (highest) resonance value. When a product is tested under these conditions, it will be exposed to the largest resonance amplitudes possible, fatiguing the product in the fastest way possible.

Test engineers will benefit from using VibrationVIEW’s peak tracking control. With it, they can conduct precise testing that maximizes the transmissibility value of the resonances while maintaining high-quality control.