Octave analysis is a tool that engineers typically use for audio analysis. It groups the frequencies of an acoustic signal into “bins,” often in a way that reflects how humans perceive the frequency spectrum.

The width of the frequency bins depends on the octave spacing. When an acoustic signal’s frequency range is fractioned into eight bins, engineers refer to the sections as octave bands. An arrangement of twenty-four frequency bins is a one-third octave band, and so on. Unlike an FFT, octave bins are proportionally spaced rather than linear.

Octave analysis is a time-filtered result, meaning the raw signal is repeatedly passed through a time-domain filter based on octave-spaced center frequencies. Engineers can also apply frequency weighting to filtered acoustic signals to more closely represent the human response to acoustics. 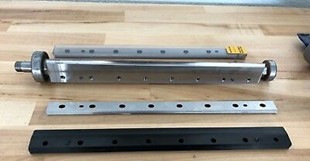 A thickness planer is a common tool for woodworker hobbyists and professionals. It flattens a board using the opposite side as a reference. One of the most common is the DeWalt 745, which uses three long blades on a rotating hub to shave wood from a piece of stock. The blades are perpendicular to the board fed through the machine.

These machines are built and designed to withstand many years of service, but woodworkers often upgrade the cutting head. One example is the segmented, helical (SHELIX) cutterhead that features 40 individual cutter blades. The cutterheads contact the wood at a slight angle off perpendicular, which shears the wood and results in a different cutting action.

Byrd Tool, the manufacturer of the SHELIX head, markets the advantage of “extreme noise reduction.” To test this claim, a VR engineer mounted triaxial accelerometers to the base of the planer and outside it near the gearbox. They also placed a microphone 4ft from the back of the planer to measure the sound pressure at a fixed location. 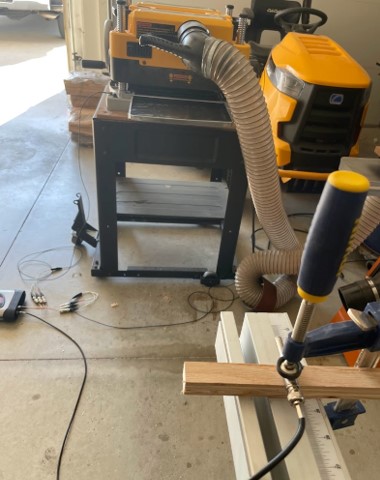 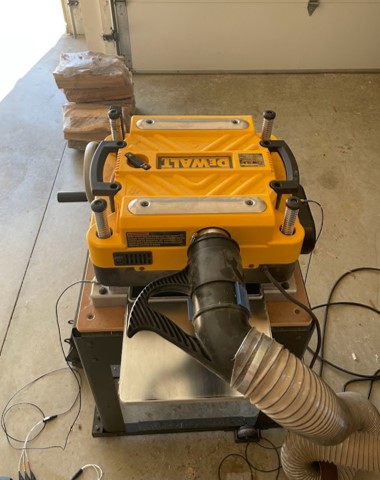 The engineer ran three tests and recorded data while the machine removed about 1/32” from a wood board. Each test consisted of three passes through the machine. Test #1 used an old cutterhead with blades that were due to be replaced. This scenario would be the worst-case. Test #2 used the old cutterhead with new, unused blades, and test #3 used the SHELIX cutterhead.

The goal of the tests was to compare the three variations of cutterheads concerning the noise levels while cutting and the vibration measurements while cutting at specific locations.

It was assumed that the noise reduction would result in a difference in both noise and vibration. In the end, the results exceeded expectations. The SHELIX head cut was smoother, resulting in a better finish on the surface of the wood, and the noise and vibration levels were significantly reduced. The following images and data provide a general comparison of each test run’s results.

The accelerometers mounted on the gearbox showed a significant difference in the vibration generated by the planer when cutting. The same piece of wood was passed through each variation repeatedly, and each test sequence output a VFW file. Using the ObserVIEW software, the engineer edited the recordings for analysis.

With the editor tool, they cut out dead space between cuts, isolated the cutting events, and downsampled the waveform to limit the sample length to the capabilities of Microsoft Excel. Then, they combined the three runs into a CSV for comparison in the software.

The power spectral density (PSD) generated from the tests displays the difference between the three environments. The only change between the tests was the blade type. However, there was a consistent change in vibration in the three linear axes, and the z-axis (vertical) had the largest amplitudes. The most significant changes occurred above 100Hz.

Reduction in noise related to the decreased vibration. One of Byrd Tool’s primary claims to encourage customer upgrades to the SHELIX cutterhead is noise reduction, and the claim was supported by octave analysis.

An A-weighted function was applied to the microphone recordings to simulate the audio effect on the human ear. The analysis showed a noise reduction with the new SHELIX head from ~105dBA to ~90dBA, which is over a 10x noise reduction.

Comparison of sound pressure levels from the Shelix cutterhead and base noise floor.

There was also a difference in the change at contact, where the board makes and then breaks contact with the cutterhead. The 3-blade cutterhead displayed a significant spike at the initial contact and release points. The overall amplitude was significantly higher compared to the SHELIX head.

The SHELIX head had a consistent noise level throughout the cut and was also smoother throughout. There is little change in amplitude as the blade contacts the board and releases it at the end. The relative smoothness of the SHELIX head can be attributed to the constant contact of the cutterhead with the board. The blade is always in contact with the board, resulting in a significant chatter reduction and a decrease in the contact-release amplitude.

The tools in the ObserVIEW software, including time-waveform editor, PSD, and octave band analysis, show a significant difference between the test series. The changes between each variation are substantial, and these tools allow for an effective quantification of data.

The decrease in vibration demonstrates the importance of sharp cutting tools. The old blades were dull, chipped, and needed replacement. The new ones performed significantly better than the old ones, but the SHELIX cutterhead reduced vibration better.