The following article was printed in the June/July 2004 issue of Test Engineering & Management Magazine.

As you know, in the vibration world, there are quite a few test “types” to which you can expose your product. The major choices are Sine, Random, Classical Shock, Transient Shock, Field Recorded Time History, Sine-on-Random, Random-on-Random and Sine-and-Random-on-Random. Frequently, our customers will request advice on which of these test types to run on their product, and in particular, how to choose between the two most common test types: sine and random. Their desire is to know which test, sine or random, is best to most quickly pinpoint flaws in their product. If they can only run one test, either sine or random, which should it be?

How would the following specifications compare with regard to amplitude/severity? 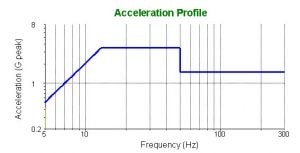 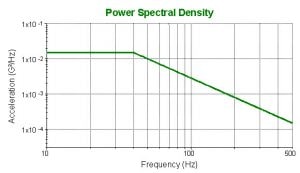 This is a very valid and interesting question. Why? Because the answer is not obvious. The sine vibration is measured in G peak, while the random vibration is measured as G rms, with the peak G levels typically left to a statistical assumption. A quick calculation tells us that the random test, which can have peak values up to 4 or even 5 times the RMS level, will apply 4 x 1.05 G rms, or 4.20 G peak to our product. Since the sine test is only 3.5 G peak, we would expect the random test to be more damaging, right?

When we use a random vibration, it is not so simple because not all of the vibration is amplified by the resonance. Let’s further assume the resonance has a Q factor of 5 or more. In that case, the resonance will act as an amplifying band-pass filter with amplification equal to Q, and a bandwidth equal to Df, where

It will also be helpful to refer to the following relationship, which tells us that, for a given RMS level, the PSD level is inversely proportional to the full bandwidth of the random spectrum. In more general terms, a more concentrated random vibration will have a higher PSD value.

From equation (4) we note three features of the peak amplitude for a random test:

Now we can also compare the peak vibration levels on the product for both Sine and Random tests by comparing equations (1) and (4) with Aproduct,sine = Aproduct,peak,random. 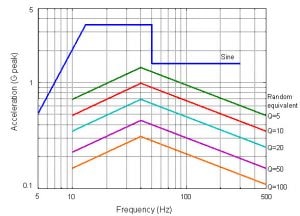 At the time Don asked his question, John was at Sperry Marine in Charlottesville Virginia, setting up for some equipment installation training with Dave Maxwell and Joe Reisinger. This was a great time to demonstrate and test for the differences! As a single test is worth a thousand opinions, we set up to run both the random test and the sine test on a slip plate (figure 9). The slip plate had two elements mounted on it, each with different resonant frequencies. The elements were aluminum masses attached by threaded rods of different lengths and thicknesses, with accelerometers mounted on the mass at the top of each rod connected to channels 4 and 6.

What we needed to do for the comparison was run the tests, and then look at the G levels seen. We knew they would be 3.5 G peak for the sine test at the Control point, and, making a 4 sigma peak assumption, we expected to find 4.2 G peak at the Control point for the random test also. The two plots in figures 4 and 5 show the controlled test along with the response data for the two vertical rods with masses attached. 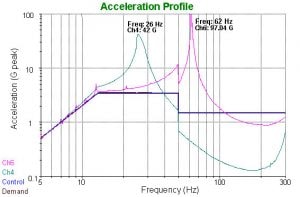 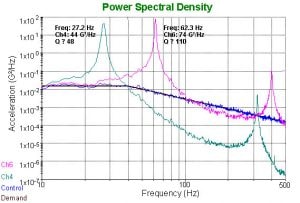 While running the tests, we also simultaneously streamed the accelerometer data to the hard disk drive for later analysis. This allowed us to be able to make a direct comparison of the peak G levels for each of the tests. As expected, at the Control point, the peak G levels for the Sine test were of course 3.5 G peak and 1.5 G peak. The Random test levels at the Control point were 1.05 G rms, as expected, and 4.8 G peak, which is a little bit higher than the 4 sigma peaks we predicted, but not unusual for a Gaussian random vibration (figure 6).

Now, as we were running the test, we observed the resonant elements mounted to the slip table going berserk! This also showed up on the controller plots (figures 4 and 5), which showed much larger accelerations on channels 4 and 6 than measured at the Control point. What could be going on here? Recall from equations (1) and (4) above, that when we have resonances in the product, they will amplify the vibration levels. The accelerometers monitoring our two resonant elements show the resonance frequencies are 27 Hz and 62 Hz, right in the middle of our test range!

Let us examine the time data for those accelerometers, which we had conveniently streamed to the hard disk drive, and see what is happening at the resonant elements. This may shed more light on the test equivalences. First looking at the frequency response for the Ch4 accelerometer (figure 5), we estimate a Q factor of 48 and a resonant frequency of 27 Hz. However, we note that the bandwidth, Δf = fn / Q = 0.6 Hz, which is less than the frequency resolution of the PSD plot (using 800 lines). This is a good indication that the Q factor estimated from this PSD will be underestimated. Since we had recorded the time waveforms to disk, we are able to load these waveforms into Matlab™ and use high-resolution spectral post-processing (13000 lines) to zoom in on the peaks. With this more accurate estimate, we find the Q level to be 140. Computing using equation (4), we expect a peak level of 4 x [ 0.015 x 140 x 27 ]1/2, or 30 G peak. Figure 7 shows the actual acceleration levels on Ch4, where we find the peak G level was 28 G.

Next looking at the frequency response for the Ch6 accelerometer (figure 5) we estimate a Q factor of 110 and a resonant frequency of 62 Hz. Again we find the bandwidth, 0.6 Hz, to be less than the frequency resolution of the PSD plot, so we need to post-process this recorded waveform to obtain a more accurate estimate of the Q factor. Using 13000 lines of resolution we estimate the Q factor to be 200. Computing using equation (4), we expect to see peak levels of 4 x [ 0.00673 x 200 x 62 ]1/2, or 37 G peak. Figure 8 shows the actual acceleration levels on Ch6, where we find the peak G level was 42 G.

Let’s make a table of the results, so we can get the whole picture:

You may also notice that the sine resonance peak values were not as high as would be predicted by the Q factor. By reviewing the recorded time data for Ch4 we are able to determine that, at the 27 Hz resonance, the sine sweep passed through the resonance too quickly to fully excite the resonance. Repeating the test using a slower sweep rate or a resonance search-and-dwell feature would allow us to more accurately find the resonance frequency and Q factor. From this, we can conclude that for high Q values, to get the full Q amplification effects of a sine test, you must either sweep slowly or do a resonance dwell at each resonance.

The relative severity of a sine test and a random test will vary depending on your product’s resonant frequencies and Qs. In general, when sine and random tests have the same peak vibration levels at the control point, the product will see higher vibration levels with a sine test than with a random test due to the resonances in the product. Equation (5) gives you a way to convert a random PSD into an approximately equivalent sine peak acceleration, as long as you know the resonant frequencies and Q factors of the product. 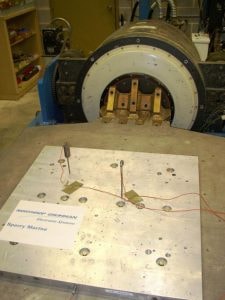