Present-day methods of random testing assume a Gaussian (Kurtosis = 3) mode of distribution of random data. This means that the vibration test controller software takes all the peak acceleration values from a data set and finds its average. It averages the data in such a way that the highest peaks produced by this process will be within +/- 3 sigma from the average. (See Figure 1.1 to see Gaussian distribution of accelerations in a sample kurtosis test). 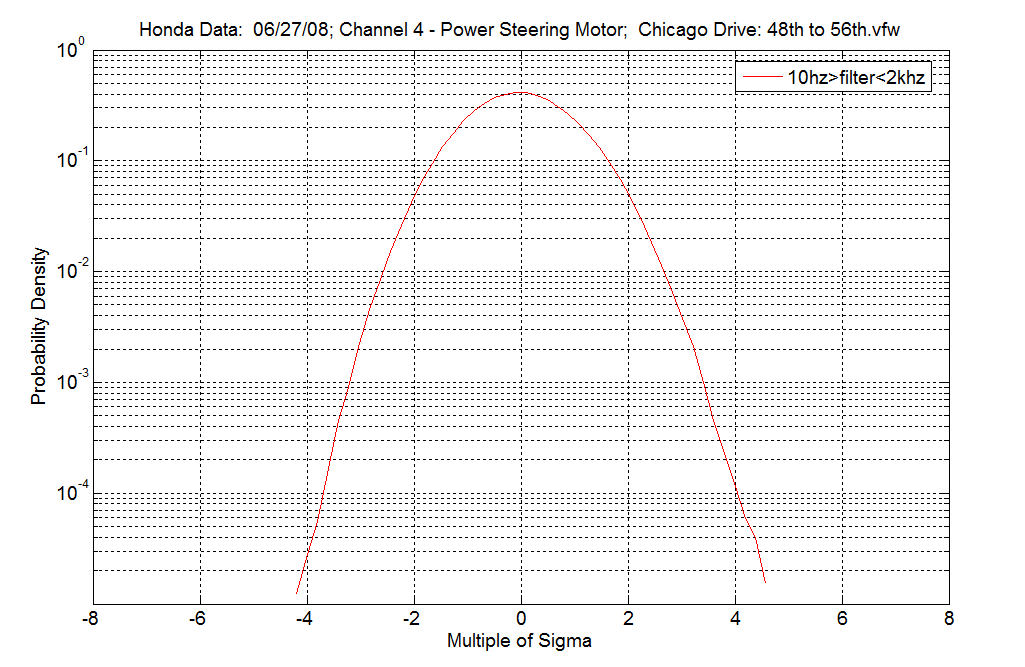 This process, consequently, removes (by its averaging process) the very large peak accelerations that occurred in the field-data. Thus, this kind of random test, although it contains the same amount of energy as the original field-data, it does not contain the same level of peak accelerations. This Gaussian method of random vibration is not realistic. It under-tests the product because it lacks the very large accelerations that are responsible for damaging the product. Therefore, in the context of the transportation industry, these Gaussian random tests will fail to identify the large peak accelerations that a product will encounter on the road, rail, or air. The packaging industry, therefore, will be prone to under-package their products.

A Solution for Random Testing Problem 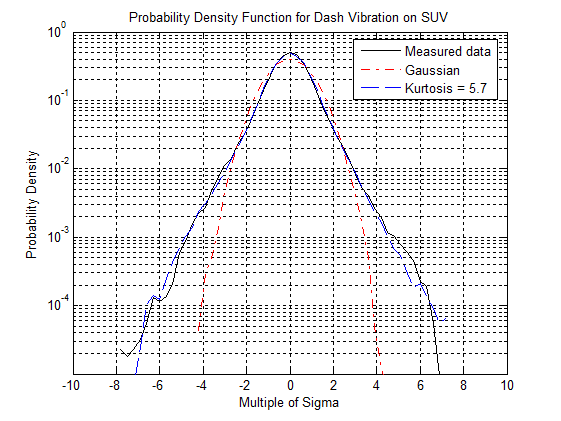 A newly patented kurtosis control method for random vibration testing, as developed by Vibration Research Corporation, will permit the adjustment of the kurtosis levels while maintaining the same testing profile and spectrum attributes. Adjusting the kurtosis level will allow the product to be tested nearer to real-life scenarios.3,4 Kurtosion® will make testing by the transportation industry much more realistic. 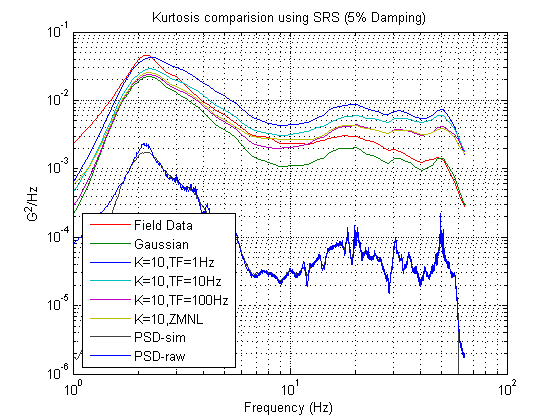 Figure 2.1: SRS plot of Transportation Data LB4 with random vibration tests with varying kurtosis values and varied Transition Frequency. Note how the SRS plot is a handy way to see how an increasing kurtosis value brings higher accelerations across the frequency spectrum. Note also how the plot of the PSD is identical for both the original data and the laboratory test data, indicating the tests are identical in terms of the “energy” of the test.

To illustrate the point that the packaging industry would benefit from using Kurtosion®, a transportation data set representing data from a truck-rail-truck run from California to Chicago (recorded on an IST EDR-4 recorder and obtained from Steve Smithson of Smithson and Associates – Edina, MN) was analyzed. The transportation data was played back in the laboratory, varying the kurtosis and Transition Frequency parameters, and graphing the SRS plots for each test.

The data was examined to determine its peak acceleration levels. The PSD and SRS of the data were analyzed. Then the data was replicated in the laboratory with VibrationVIEW software. The data set was played back in “Random” and the Kurtosis control method was applied. Various kurtosis values were used and compared. The kurtosis control method keeps the overall PSD (the amount of energy of the test) the same regardless of the kurtosis setting. The SRS plots will differ for each trial because the tests with higher kurtosis settings will have higher peak accelerations.

Consider the results of this demonstration as shown in Figure 3.1. Note that the PSD of the original data and the PSD of the replicated data are the same for all tests – indicating that the tests are identical in terms of their total energy. Note also that the SRS plot nicely illustrates that as the kurtosis increases for each of the tests, the peak acceleration levels also increase across the frequency spectrum. This shows how a test engineer could manipulate the peak acceleration levels by adjusting the kurtosis level. Finally, note that the Gaussian distribution (k=3) “under-tests” the product, evidenced by the fact that the Gaussian’s SRS plot is lower than the SRS plot of the original field-data. This further substantiates that field-data is not Gaussian in nature and that the transportation industry would better replicate field data by using Kurtosion®, which allows the adjustment of the laboratory’s kurtosis, rather than assuming an unrealistic Gaussian distribution. 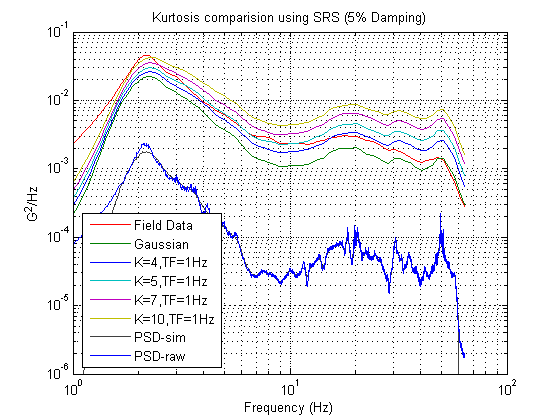 In a “global society” the transportation industry will be called upon more than ever to move goods from country to country and from home to home. The vibration industry has known for some time now that field data is not always Gaussian in nature as has been assumed for many years. In fact, the data sets from Steve Smithson that are examined in this paper clearly illustrate that transportation data is certainly not Gaussian either. With Vibration Research Corporation’s newly patented Kurtosion®, the transportation industry needs no longer to assume Gaussian vibration when replicating field data. Kurtosion® will allow the test engineer to create a random vibration test with the same kurtosis level as the field data while maintaining the same energy (PSD) and other attributes of the test. This will provide much more realistic tests, ensuring that the product is tested more closely to the environment it will experience on the road, on the rail, or in the air. Using Kurtosion®, the transportation industry can bring more precious packages safely to their customers. That’s sure to make millions of faces smile every day.