Statistical Properties of the Random PSD

The PSD of a Gaussian random waveform is computed using a Fast Fourier Transform (FFT). The FFT is a linear transform, and it is given a Gaussian input. As a result, the output of the FFT at each frequency line is a complex number, with a Gaussian real part, and a Gaussian imaginary part. These are squared and added together to get the magnitude, so the square magnitude of the FFT output is a Chi-squared distributed random variable with 2 degrees-of-freedom (DOF). To compute an averaged random PSD, F frames of time data are measured, an FFT of each frame is taken, and the square magnitudes are averaged together. As a result, the averaged PSD of a Gaussian waveform is a Chi-squared distributed random variable with (2*F) DOF. This is where the DOF averaging specification for a random vibration test comes from.

Using this relationship and given a DOF value, we can tabulate the probability of exceeding a given dB level from the mean. If we note that the mean of a Chi-squared random variable is equal to the DOF, n, then, using MATLAB® notation,

Table 1: Probability of a PSD value exceeding the tolerance dB for a given DOF

This calculation tells us what DOF parameter is required to achieve and maintain a stated tolerance with reasonable probability. Since the waveform is random, we can never achieve a full 100%, but some cases get very close.

Table 2: Probability of all lines within tolerance band, 800 lines

Table 3: Probability of all lines within tolerance band, 400 lines

Table 4: Confidence interval, in dB, of a PSD value for a given DOF 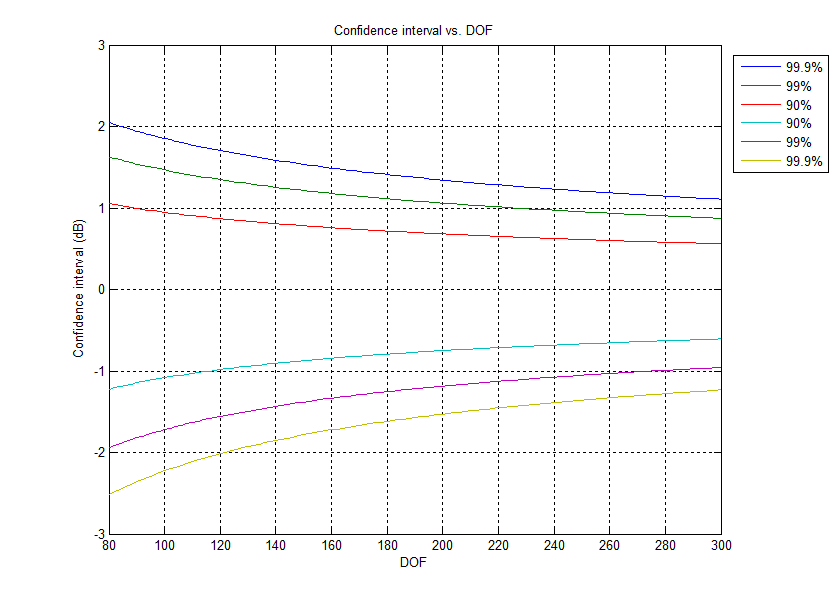 The above calculations, with DOF equal to 2 times the number of frames, assume independent frames of data. When overlapping frames and window functions are used, the frames are no longer independent, and the effective DOF of the average will not be simply a multiple of the number of frames. The effective DOF can be estimated numerically by simulating data with the specified overlap and window function applied, computing the statistics of the resulting PDF, and comparing those statistics to a Chi-squared distribution with a known DOF.