What Is Random Vibration Testing?

There is some confusion about the various tests available to the vibration testing engineer. Difficulties encountered usually center on the differences between sinusoidal vibration (sine testing) and random vibration testing. 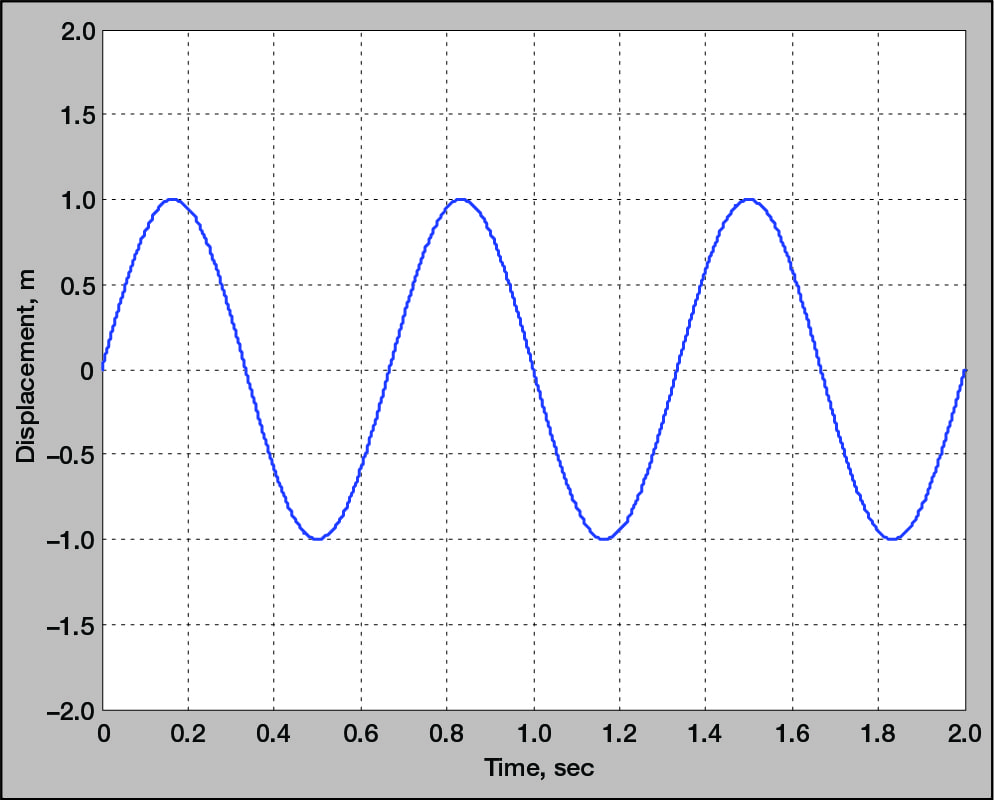 Figure 1. Time history of a sinusoidal waveform. Note its repeatability and predictability.

Sine waves are important in more areas than music. Every structure can vibrate and has particular frequencies (resonance frequencies) in which it vibrates with the greatest amplitude. Therefore, sinusoidal vibration testing is important to help understand how any structure vibrates naturally.

Because “real-world” vibrations are not sinusoidal, sine testing has a limited place in the vibration testing industry. Part of the usefulness of sine testing is its simplicity, so it is a good point of entry into the study of vibrations.

Sine testing is used primarily to determine damage to structures. The best pro-sine arguments are to search for product resonances and then to dwell on one or more of them to determine modal properties and to determine fatigue life associated with each mode.¹

Aside from testing a product to find and dwell at its resonance frequencies to determine fatigue life, one might also use sine testing to determine damage to equipment. A sine sweep prior to any shock or random vibration test will identify the dominant resonances of the tested equipment. Repeating the sine test after otherwise abusing a product should produce the same test results unless the DUT has been damaged. Any differences in the sweeps indicate damage to the equipment – perhaps something as simple as a shift in the natural resonance frequencies that might suggest a few loose bolts need to be tightened. 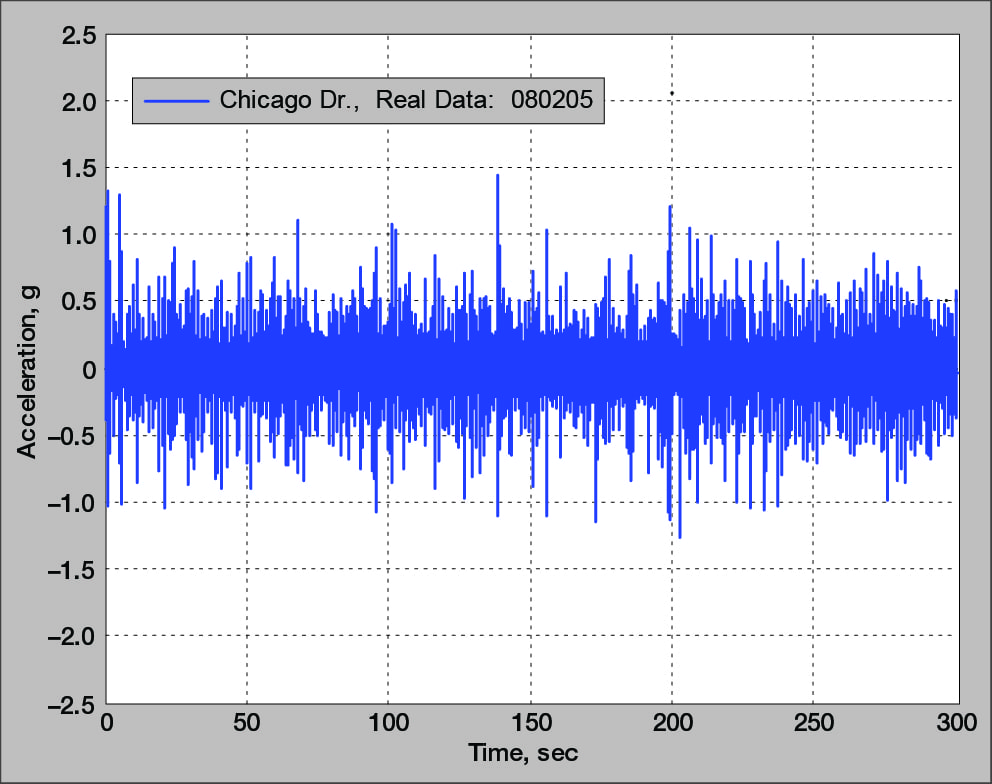 Vibrations found in everyday life scenarios (a vehicle on a typical roadway, the firing of a rocket, or an airplane wing in turbulent airflow) are not repetitive or predictable like sinusoidal waveforms. Consider the acceleration waveform (Fig 2) for the dashboard vibration of a vehicle traveling on Chicago Drive near Hudsonville, Michigan. Note that the vibrations are by no means repetitive. So, there is an important need for tests that are not repetitive or predictable. Random vibration testing accomplishes this.

Sinusoidal vibration tests are not as helpful as random testing, because a sine test focuses upon a single frequency at any one time. A random vibration test, on the other hand, excites all the frequencies in a defined spectrum at any given time. Consider Tustin’s description of random vibration – “I’ve heard people describe a continuous spectrum, say 10-2000Hz, as 1990 sine waves 1Hz apart. No, that is close but not quite correct. Sine waves have constant amplitude and phase, cycle after cycle. Suppose that there were 1990 of them. Would the totality be random? No. For the totality to be random, the amplitude and starting phase of each slice would have to vary randomly, unpredictably. Unpredictable variations are what we mean by random. Broad-spectrum random vibration contains not sinusoids but rather a continuum of vibrations.” ¹

One of the main goals or uses of random vibration testing in the industry is to bring a DUT to failure. For example, a company might desire to find out how a particular product may fail because of various environmental vibrations it may encounter. The company will simulate these vibrations on a shaker and operate their product under those conditions. Testing the product to failure will teach the company many important things about its product’s weaknesses and ways to improve it. Random testing is the key testing method for this kind of application. 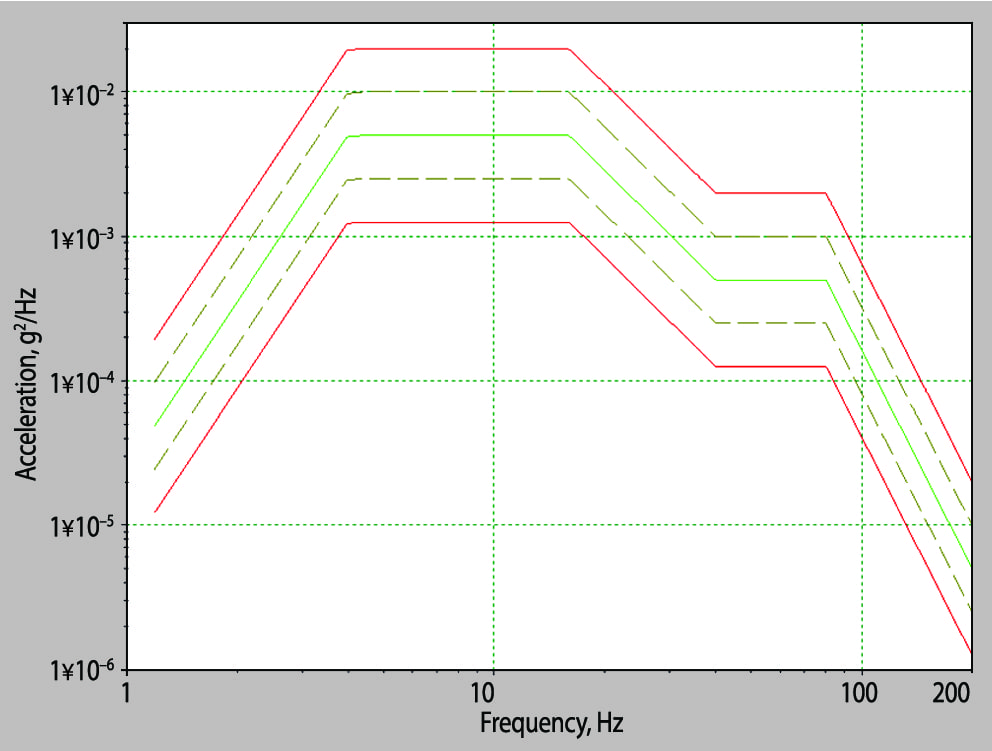 To perform random testing, a random test spectrum must be defined. Real-time data acquisition utilizes spectrum-averaging to produce a statistical approximation of the vibration spectrum. Generally, the random vibration spectrum profile is displayed as a power spectral density (PSD) plot. This plot shows mean square acceleration per unit bandwidth (acceleration squared per Hz versus frequency Fig 3). The shape of a PSD plot defines the average acceleration of the random signal at any frequency. The area under this curve is called the signal’s mean square (g²) and its square root is equal to the acceleration’s overall root-mean-square (RMS) value often abbreviated σ.

A random test is conducted by using closed-loop feedback to cause the random vibration of a single location (typically the shaker table) to exhibit the desired PSD. The PSD demonstrates how hard the shaker is working, but it does not give any direct information about the forces experienced by the DUT. The g²/Hz PSD is a statistical measurement of the motion experienced at the Control point on the test object – this is important to remember. Since the PSD is the result of an averaging process, an infinite number of different time waveforms could have generated such a PSD. The idea that an infinite number of real-time waveforms could generate a particular PSD can be seen from the graphs shown in Figures 4-7 produced from data collected at Vibration Research Corporation, June 28 and 30, 2005. Note that the PSD curves (Figures 6 and 7) are virtually identical although they were generated from entirely different waveforms. 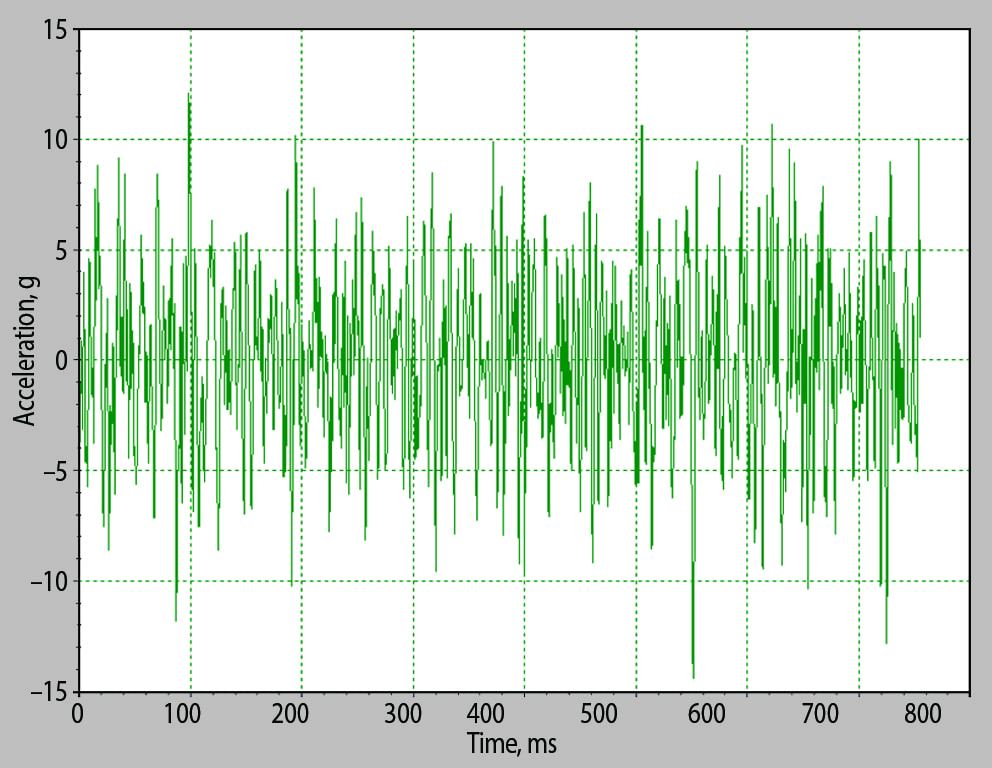 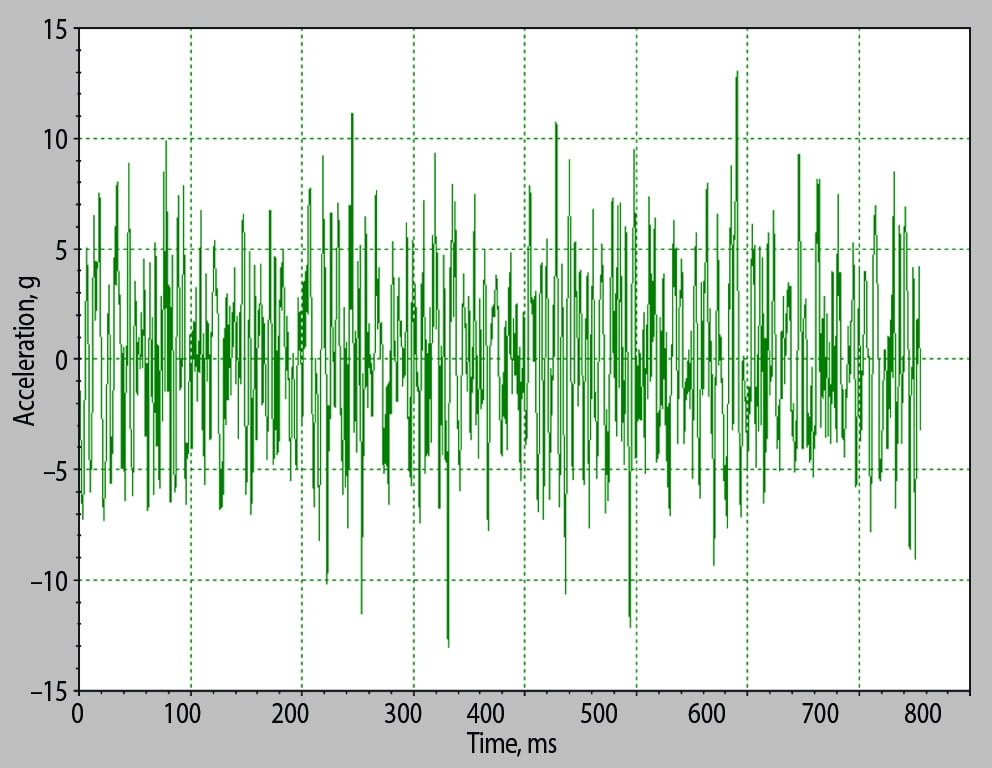 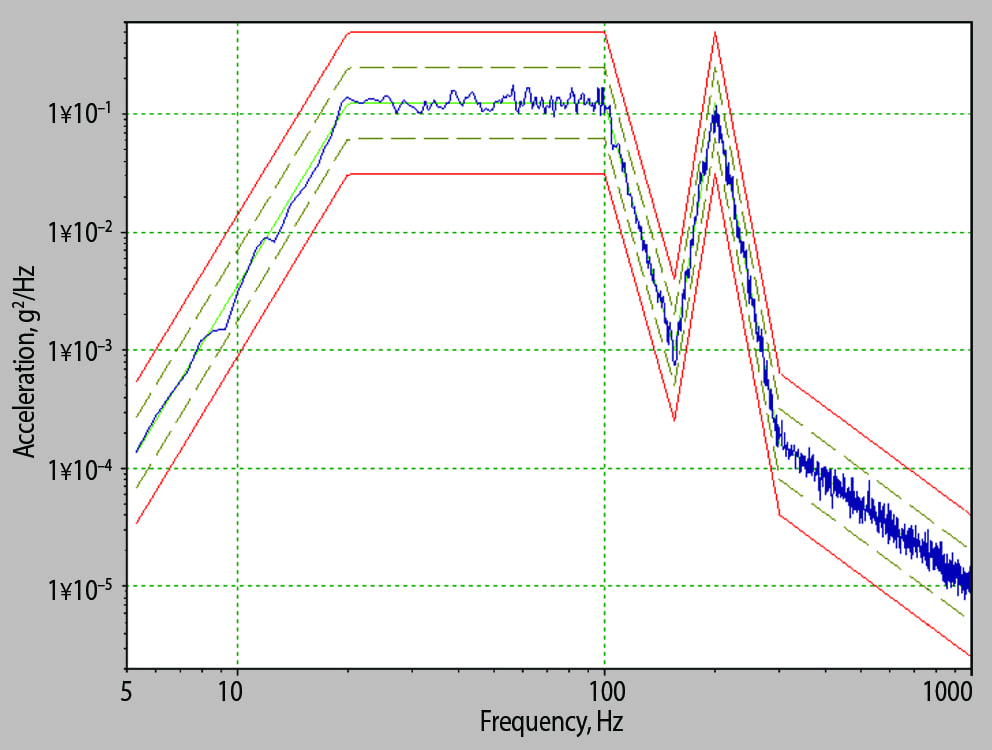 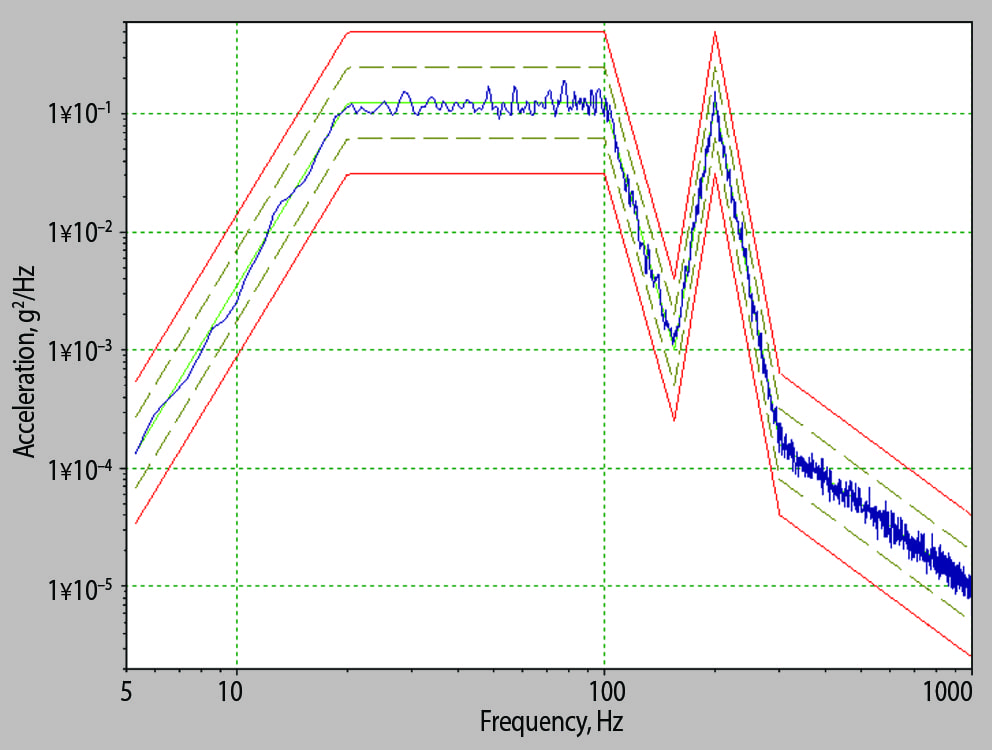 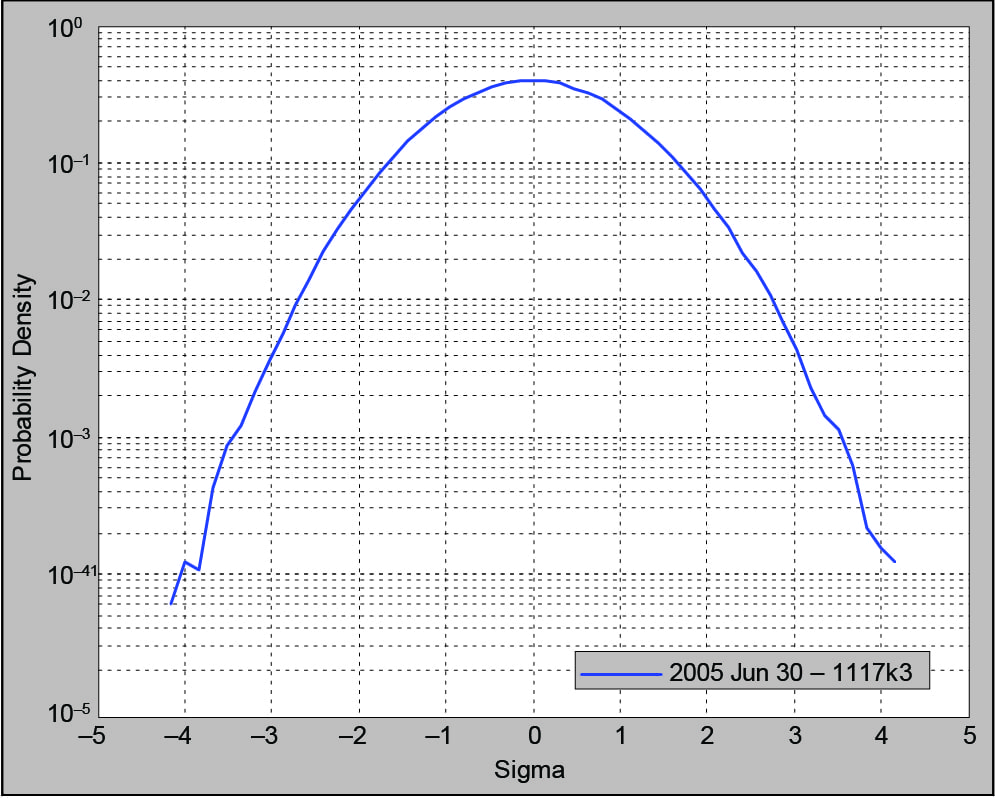 The PDF shown in Figure 8 conveys the probability of the signal being at a particular g-value at any instant in time. Its vertical units are 1/g and the area under this curve is exactly 1. Thus, the area under the PDF between any two (horizontal axis) g values is the probability of the measured signal being within that amplitude range. Note that Figure 8 is drawn using a logarithmic vertical axis. This serves to make the extreme value “tails” more readable.

The horizontal axis of an acceleration PDF has units of gpeak (not RMS). This axis is often normalized by dividing the g values by the signal’s RMS values. Many signals will exhibit a symmetrical “bell-shaped” PDF with 68.27% of the curve’s area bounded by ±σ and 99.73% within ±3σ. Such signals are said to be “normal” or Gaussian. A Gaussian signal has a Kurtosis of 3 and the probability of its instantaneous amplitude being within ±3σ at any time is very nearly 100% (actually 99.73%).

There are many “real-life” situations where there are more high acceleration values than a Gaussian distribution would indicate. Unfortunately, most modern random control techniques assume the Control signal should be Gaussian with the majority of the instantaneous acceleration values within the ±3σ range. This assumption removes the most damaging high peak accelerations from the test’s simulation of the product’s environment and “under testing” results. In fact, a Gaussian waveform will instantaneously exceed three times the RMS level only 0.27% of the time.

When measuring field data, the situation can be considerably different, with amplitudes exceeding three times the RMS level as much as 1.5% of the time. This difference can be significant since it has also been reported that most fatigue damage is generated by accelerations in the range of two to four times the RMS level.² Significantly reducing the amount of time spent near these peak values by using a Gaussian distribution can therefore result in significantly reducing the amount of fatigue damage caused by the test relative to what the product will experience in the real world. So Gaussian distribution is not very realistic.

Hence, present-day methods of random testing may be unrealistic for some simulations because they fail to account for the environment’s most damaging content. Furthermore, random testing with Gaussian distribution will result in a longer time-to-failure because the higher accelerations responsible for failure have been omitted. Therefore, Gaussian random testing, for all its advantages over traditional sine testing, has its own disadvantages, and a better method of testing products is called for. Vibration Research Corporation has developed such a method.³ It is called Kurtosion®. Kurtosion allows a random vibration test to be run with a user-specified kurtosis of 3 or greater. This amounts to using feedback to force the Control signal’s PDF to have broader “tails”. That is, more intense peak accelerations are included more often than using a Gaussian controller. This method permits the adjustment of the kurtosis level while maintaining the same testing profile and spectrum attributes. With this new technique, a random vibration test is best described by a PSD and an RMS versus time schedule and an additional kurtosis value. The required kurtosis parameter can be easily measured from field data. This is similar to current random tests but is one step closer to the vibrations measured in the field. 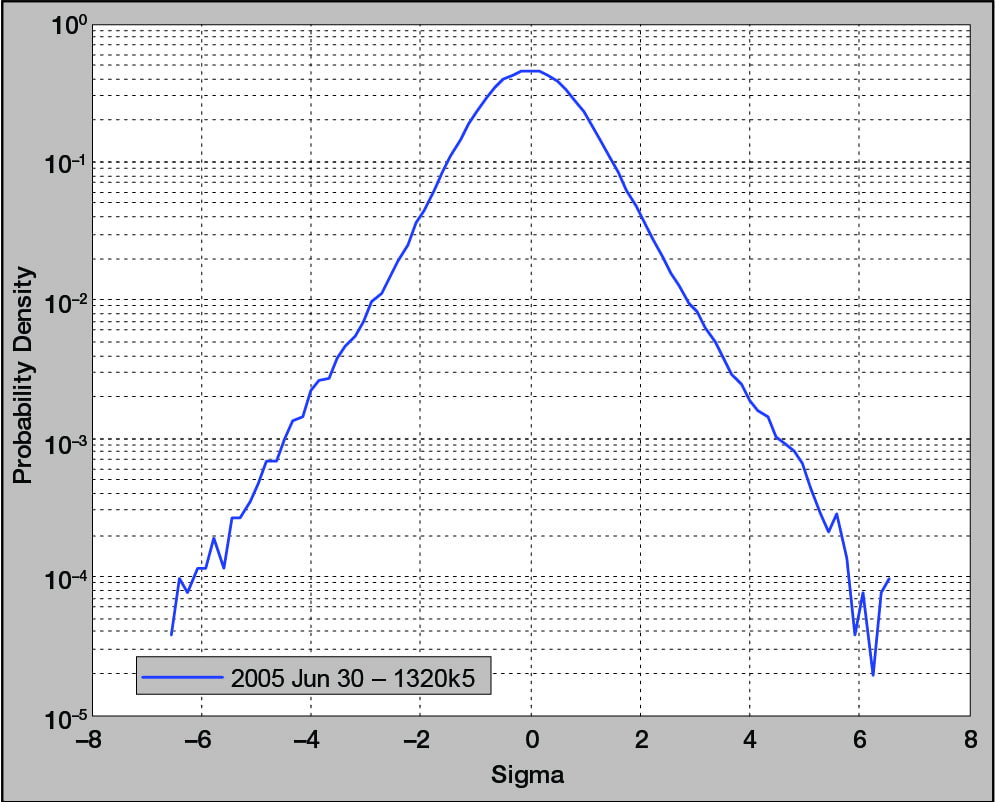 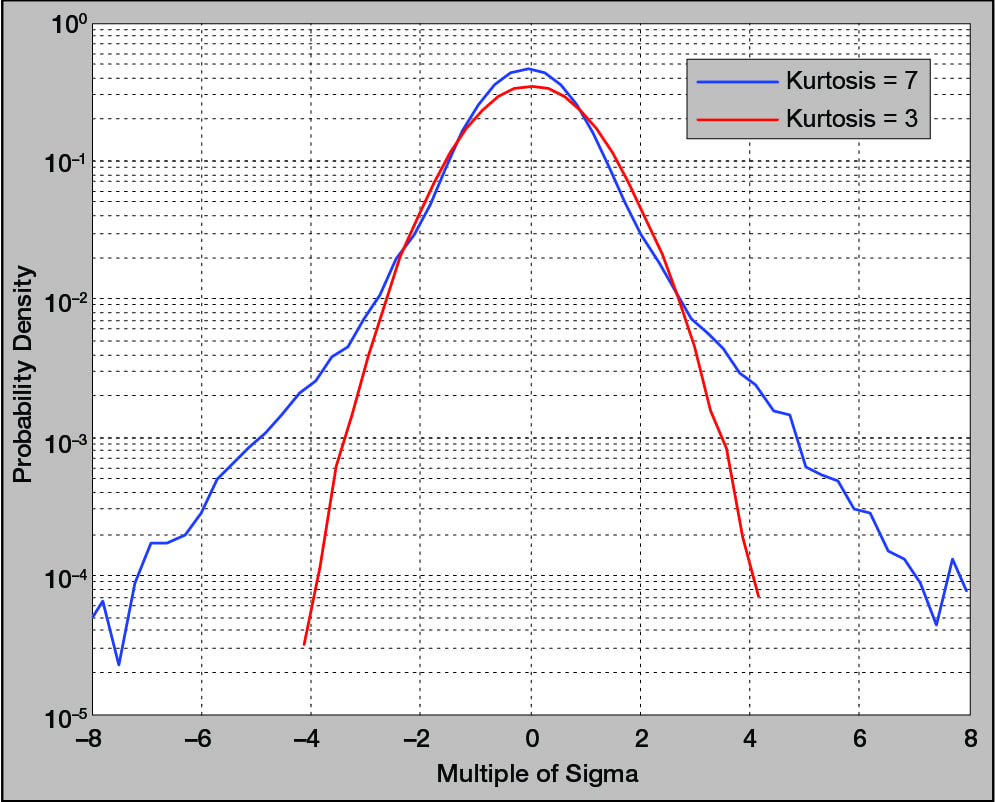 Therefore, the fundamental difference between a Gaussian and controlled-kurtosis distribution is that, although the two data sets may have the same mean, standard deviation, and other properties, the Gaussian data set has its data points closely centered on the mean, while the controlled-kurtosis distribution has larger “tails” further from the mean.

Some Other Testing Options

Modern test and measurement systems are blessed with inexpensive memory. In recent years, it has become feasible to record a long-time history and then play it back as a shake-test Control reference. Vibration Research pioneered such Field Data Replication (FDR) testing several years ago and just recently introduced their VR Observer™, a highly portable four-channel recorder in support of this and other testing purposes. While FDR is the preferred solution for many cases, it is not a replacement for random vibration testing. FDR provides an exact simulation of one instance of the environment. Random provides a statistical average of that environment. Where FDR might exactly capture what one driver experiences while driving a prescribed route, random represents the average of thousands of different drivers trying to follow the same course. While an FDR recording uses massive amounts of memory, a random reference requires very little.

Certain mixed-signal testing can also provide random signals with high kurtosis, but they are in no way competitive with Kurtosion. Sine-on-random tests may prove useful to simulate a specific environment with random and tonal components, such as an aircraft package-shelf experiencing both random air loads and engine harmonics. Random-on-random tests superimpose narrow-band random noise on broadband random noise. Such tests are claimed useful to simulate aircraft gunfire reactions. Both types of tests are designed to model a very specific class of environment and both are “tricky” to set up.