There are strong opinions in the vibration industry when it comes to calculating accumulated fatigue damage. The main argument centers around the concept of stress and its relationship to the acceleration, velocity, and displacement of the device under test (DUT). Stress is directly related to fatigue. Thus, the correct relationship to stress will dictate the correct measurement of fatigue.

In 2011, Vibration Research Corporation conducted a study and was unable to produce conclusive evidence to illustrate that strain, and consequently stress, is proportional to velocity as theory suggests. However, a second study revealed a significant finding.

Henderson and Piersol[1] maintain that “it is velocity rather than acceleration that has a direct relationship to stress” (p. 21). Consequently, they define the “damage potential spectrum” as:

Although written with a Gaa term, this equation was derived from a Gvv term because of the assumption that damage is related to the velocity of the DUT (p. 21).

Using MATLAB scripts, several data sets were generated with varied kurtosis values. One of the data sets was passed through a MATLAB script and processed with the assumption that the fatigue damage was related to acceleration. The script produced an FDS and a probability spectrum density (PSD) graph.

Same PSD for all trials regardless of methodology

The VibrationVIEW software’s programming code converts a random waveform file into an FDS using the velocity-based fatigue damage method, although other methods could easily be incorporated. The FDS, in turn, is converted to a PSD plot. A new test profile is defined from the PSD and can be used by the test engineer to simulate the specific degree of damage in an original recording. 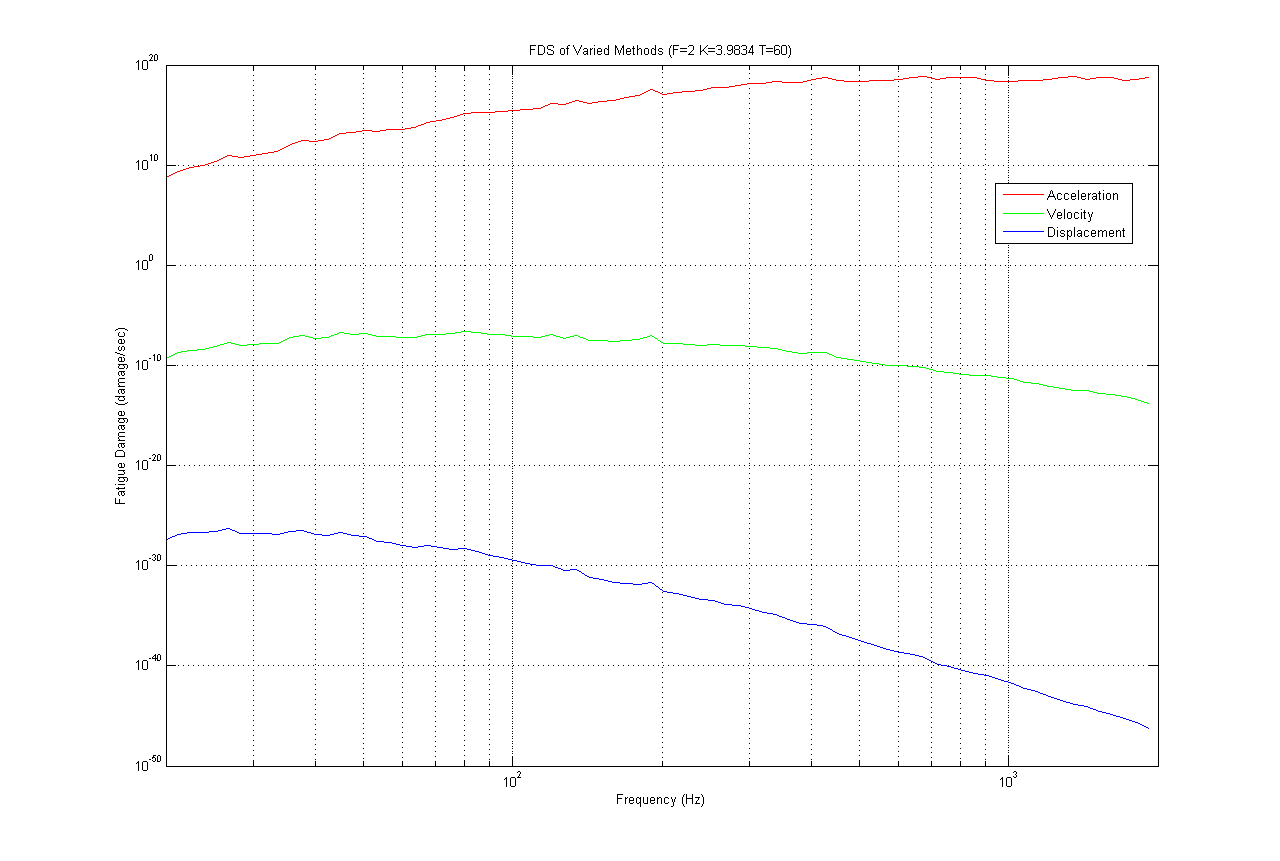 Figure 1. Different FDS for each methodology for a test of K=4. 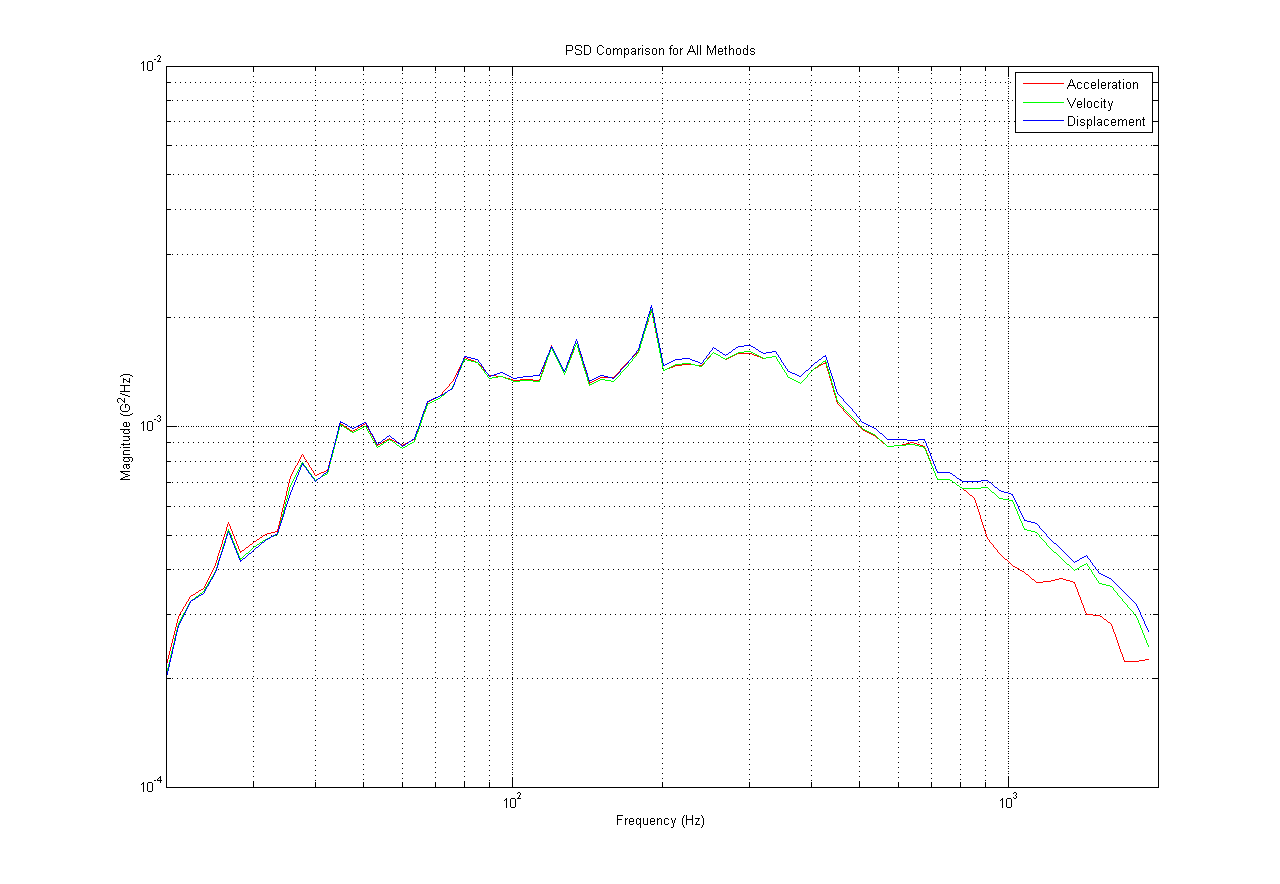 Figure 2. PSD for K=4 trial for all three methodologies. 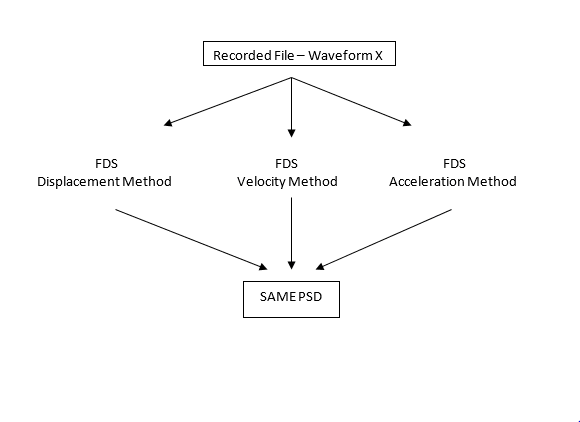 This finding demonstrates the effectiveness of VibrationVIEW programming. When a waveform is imported into VibrationVIEW, the software converts it into an FDS. The FDS is then converted into a PSD from which the test engineer can run tests (Gaussian waveform) to bring the product to a specific amount of fatigue (as illustrated by the FDS). If this Gaussian test were run and recorded, its recording would have the same FDS as the original waveform. This test shows that the VibrationVIEW code will produce the same FDS in a generated Gaussian waveform as in the originally recorded data. 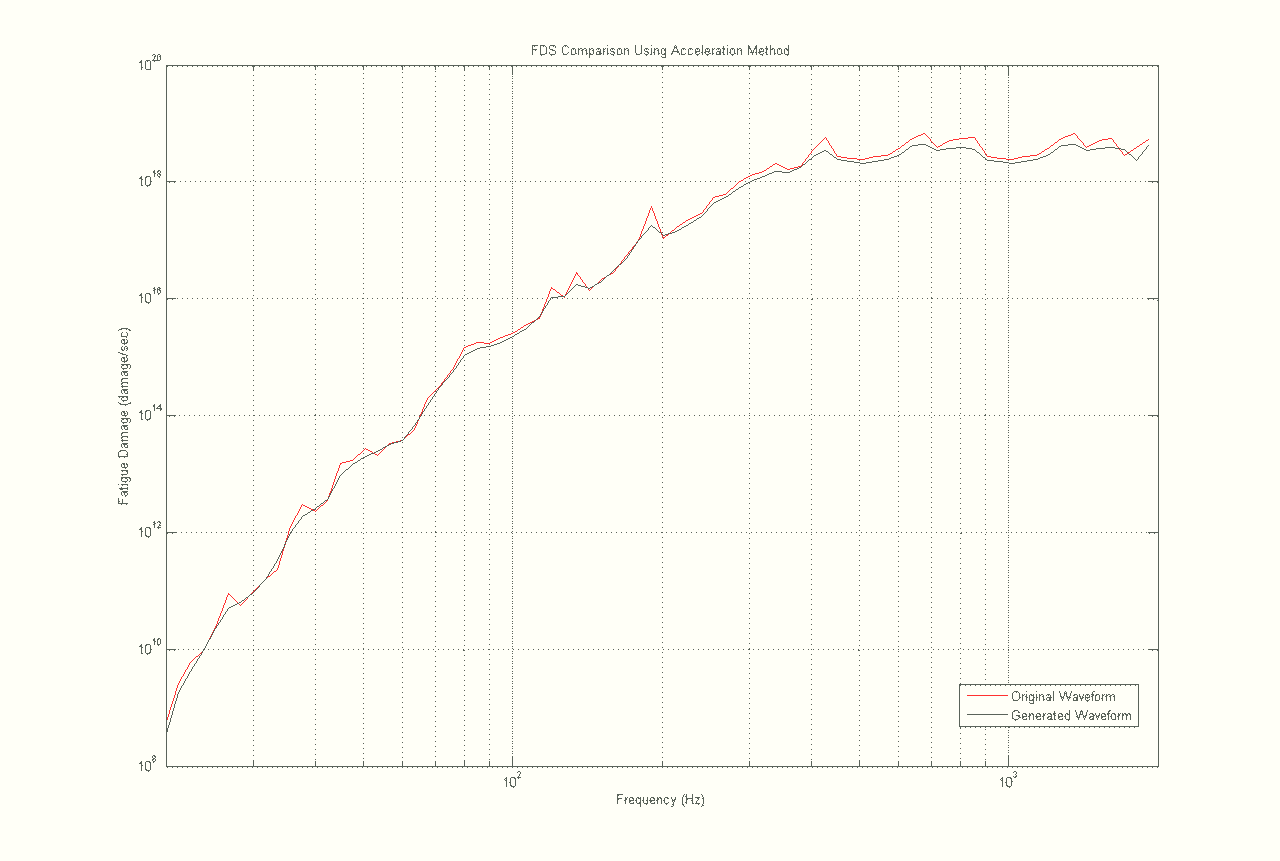 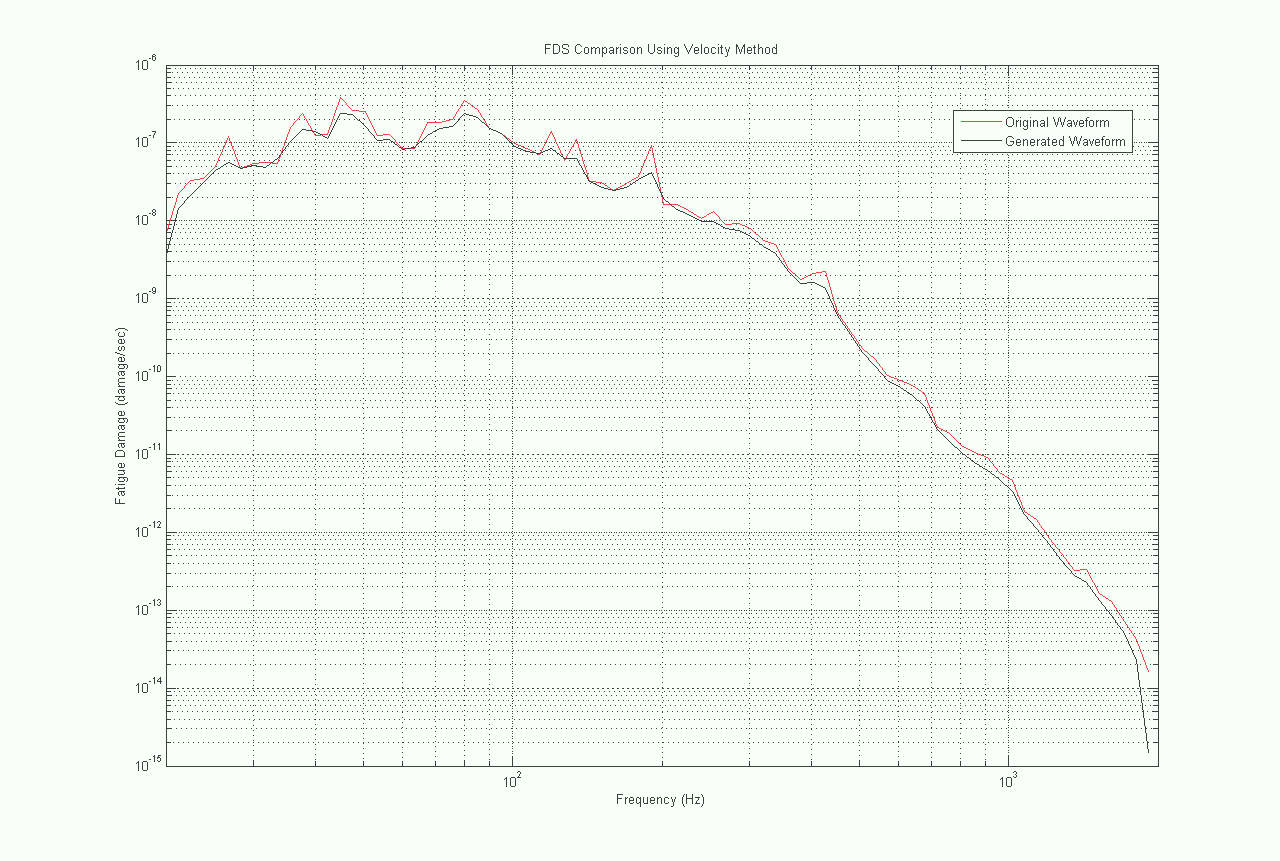 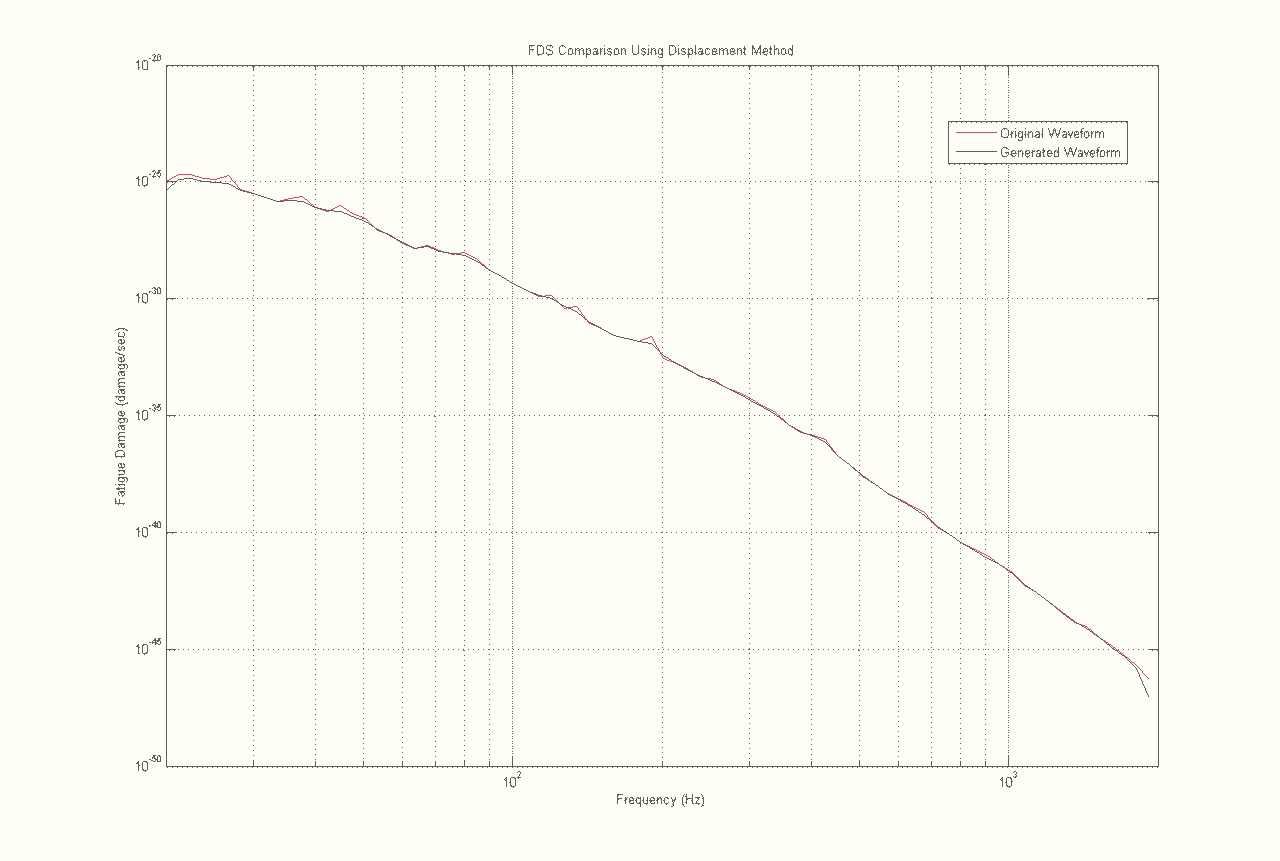 Engineers have written many papers to emphasize that the stress, and therefore the fatigue damage, of a DUT’s member is proportionally related to the velocity of the member[1],[2],[3],[4]. On the basis of the definition of strain, others have argued that strain, and consequently the stress during the elastic period of the S-N curve, is directly related to the displacement of the DUT’s member (see definition of strain[5]).

In the testing industry, it is often true that there is only one correct answer. In this case, however, we learn that all roads lead to the same PSD. This makes for a happy vibration testing community.