A random vibration test is one of the best ways to validate reliability for a mechanical product. It generates a power spectral density (PSD) that identifies resonances across a frequency range.

Aerospace organizations often want to test a very high-value piece of equipment at extremely high levels of random vibration for a very brief period of time; these short duration, high amplitude tests are representative of launch and take-off events. The goal is a realistic test that will identify any reliability issues but won’t damage the equipment. Ideally, aerospace test engineers want to see a smooth control trace on the PSD that stays within an established tolerance range.

Because these types of vibration tests typically have very tight tolerances (+/- 1.5dB), the statistics of averaging FFT power values makes it nearly impossible for all lines to be within tolerance in a short period of time. Instant Degrees of Freedom® (iDOF) calculations, discussed below, are a statistically valid way to provide smooth lines and have a PSD within tolerance, if appropriate, in a brief testing period.

The underlying problem is that a PSD is created by separating time-domain data into a series of frames, moving to the frequency domain by calculating the Fast Fourier Transform (FFT) for each frame, and then averaging the power values of the FFTs. In a PSD there are two sources of error, control error, and estimation error. Control error refers to the discrepancy between the actual PSD of the data (signal) and the desired demand PSD. Estimation error refers to the discrepancy between the estimated, plotted PSD, and the actual PSD of the signal.

The inherent nature of randomness means that there is statistical variance in the PSD, creating estimation error, that is reduced as more data frames are captured and contribute to the calculation. This takes extra time, something engineers don’t have in a short duration test.

One approach to avoiding an initially jagged, high variance display plot is to simply suppress the PSD display until traces are sufficiently averaged. While unpleasant early randomness is hidden, the Blank Display Method also hides what is actually happening on a shaker early in a test, which can include out-of-tolerance conditions. Clearly a dangerous situation.

A more common, but equally dangerous, approach to achieving an attractive PSD for short duration tests is data multiplication. It involves starting the test at a low level and then, as the test ramps up, multiplying the low-level data by a scaling factor and presenting it as full level data. Sounds straight forward but it is based on the assumption that a DUT’s mechanical behavior at the high-level mimics the low-level behavior – and that is simply not true. The mechanical world is not linear. Resonances will typically shift in both frequency and amplitude when signal levels change. Data multiplication masks changes occurring at the product resonances, so the test engineer is unaware of potentially damaging vibration energy levels. Multiplying low-level data is inaccurate and misleading to test engineers.

To illustrate, the white PSD in figure 1 is generated by a test controller at a low level, early stage, while the blue comes from an independent signal analyzer. Both show essentially the same behavior.

Figure 2 shows a white PSD created for the full level by data multiplication while, again, the blue comes from an independent signal analyzer. In this case, the graphs are drastically different. The data multiplication graph does not show the resonant peaks, including some that are well beyond abort limits. An engineer viewing the white PSD can’t see what is really happening during the test and is left with the false impression that the test is staying within tolerance.

This lack of visibility into testing reality can result in under testing, which means the DUT could pass the test but fail during field use, or overtesting that damages the DUT with vibration energy beyond required test levels. Overtesting error is especially significant if it results in avoidable damage to unique and extremely expensive components or payloads.

ACCURACY BY RESETTING THE AVERAGE

To accurately display what is happening in the real, non-linear world, the PSD averaging should be restarted (or reset) with every change in level. All the PSD data is discarded and averaging starts over, from the beginning. The advantage of this approach is that it displays exactly what is happening on the shaker. A major disadvantage is the time required for averaging a sufficient number of frames; so, if the trace was within a 1.5dB tolerance at a low level, it will take some time to get back within that tolerance. And, if your test requirement is that all lines of resolution must always be within +/- 1.5dB, this method is not going to work.

Note that high PSD estimation variance during the start of a test, or a change in level, does not mean there is something wrong with the PSD estimation method. Volatility is a natural and expected characteristic of a random signal. The variance is only reduced as more frames of similar data are calculated and averaged into the PSD. 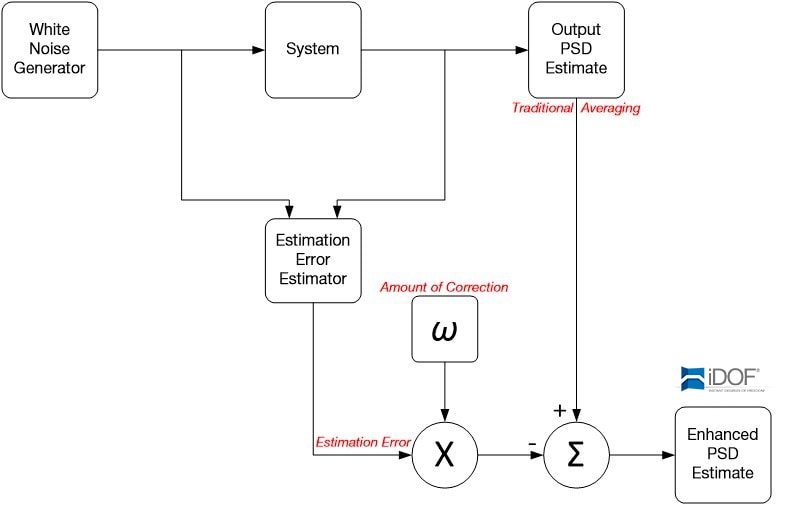 Fortunately, there is a statistically valid approach to quickly creating an accurate PSD. In a random test, the variance is based on chi-squared distribution. Using this statistical understanding, the variance can be calculated and taken out of the PSD plot, essentially removing the estimation error. (See sidebar, The Statistical Nature of a PSD.) This approach delivers a smooth but accurate PSD, preserving control error so that an engineer has an accurate view of the DUT’s behavior.

iDOF is an optional module in the VibrationVIEW software suite. It uses an advanced algorithm to deliver accurate, low-variance PSD estimates during vibration testing, estimates that are calculated much more quickly than those using traditional averaging. iDOF removes the estimation error while displaying the control error, which is the true difference between the PSD of the signal and the demand PSD.

With iDOF, control error becomes visible much sooner than with traditional averaging. For example, 10 frames of data can be processed with the iDOF algorithm to produce a PSD estimate comparable to traditional averaging with 100 frames. This enables fast detection of changing responses such as shifting resonances (e.g. due to a product beginning to fatigue) without using long averaging times, a critical capability for short duration tests.

iDOF does not touch the control itself, i.e., it does not affect the signal being sent from the controller to the system. iDOF calculations are applied to the estimation of the signal and clarify the estimation of the signal’s PSD. Hence, the control trace more clearly displays the true control signal, with less raggedness. After a change in level, iDOF quickly reduces the variance of the PSD estimate and does so without using the low-level data or some other trick. Thus, iDOF quickly exposes any lines truly out of tolerance without masking resonances, and without requiring the time necessary for traditional averaging.

Figure 4 shows the PSD from a signal analyzer using traditional averaging for a test at full level, while figure 5 shows the PSD using iDOF, also at full level. The iDOF PSD preserves and displays the resonances and vibrations experienced by the DUT while also significantly reducing the raggedness of the plot. The estimation error has been confidently removed while actual vibrations and deviations from demand due to control are clearly displayed. 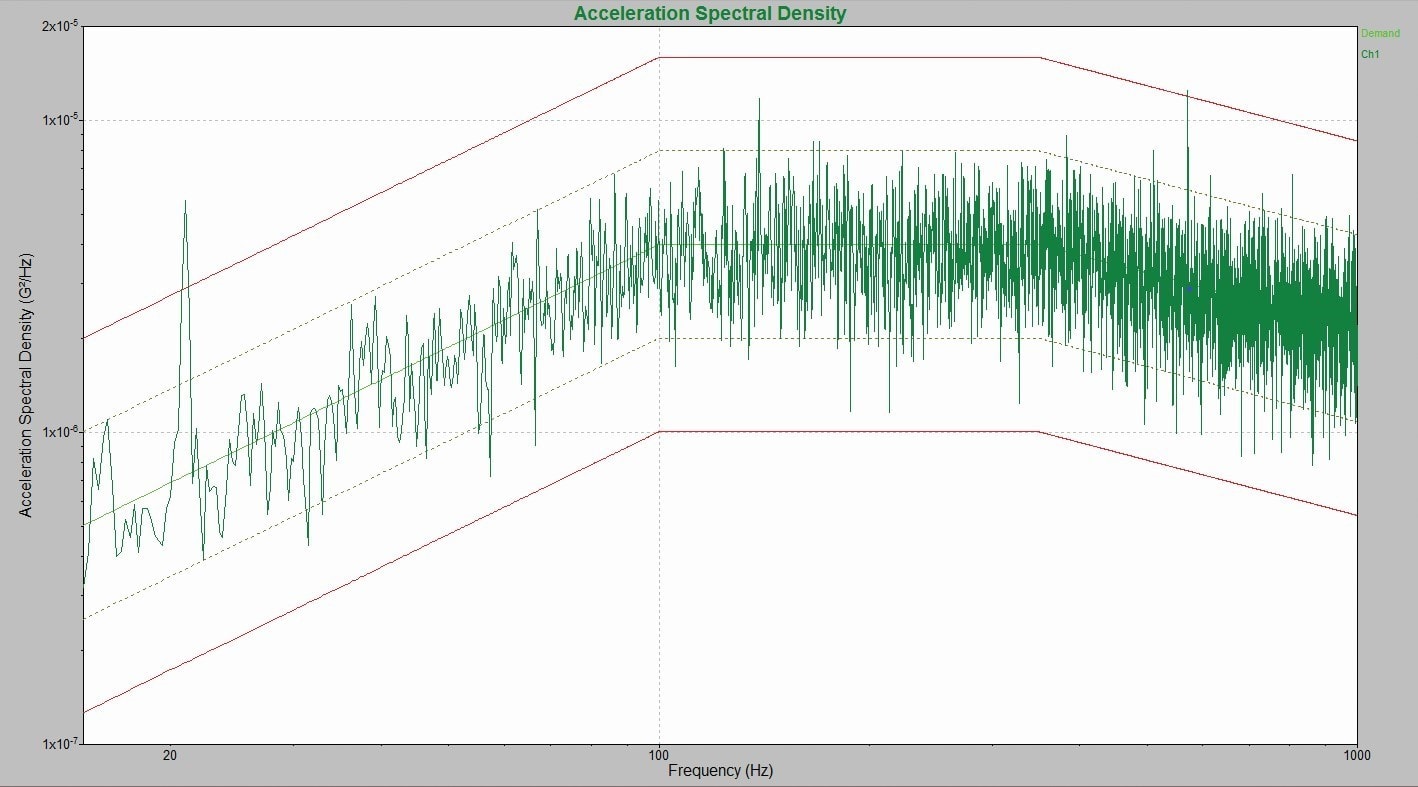 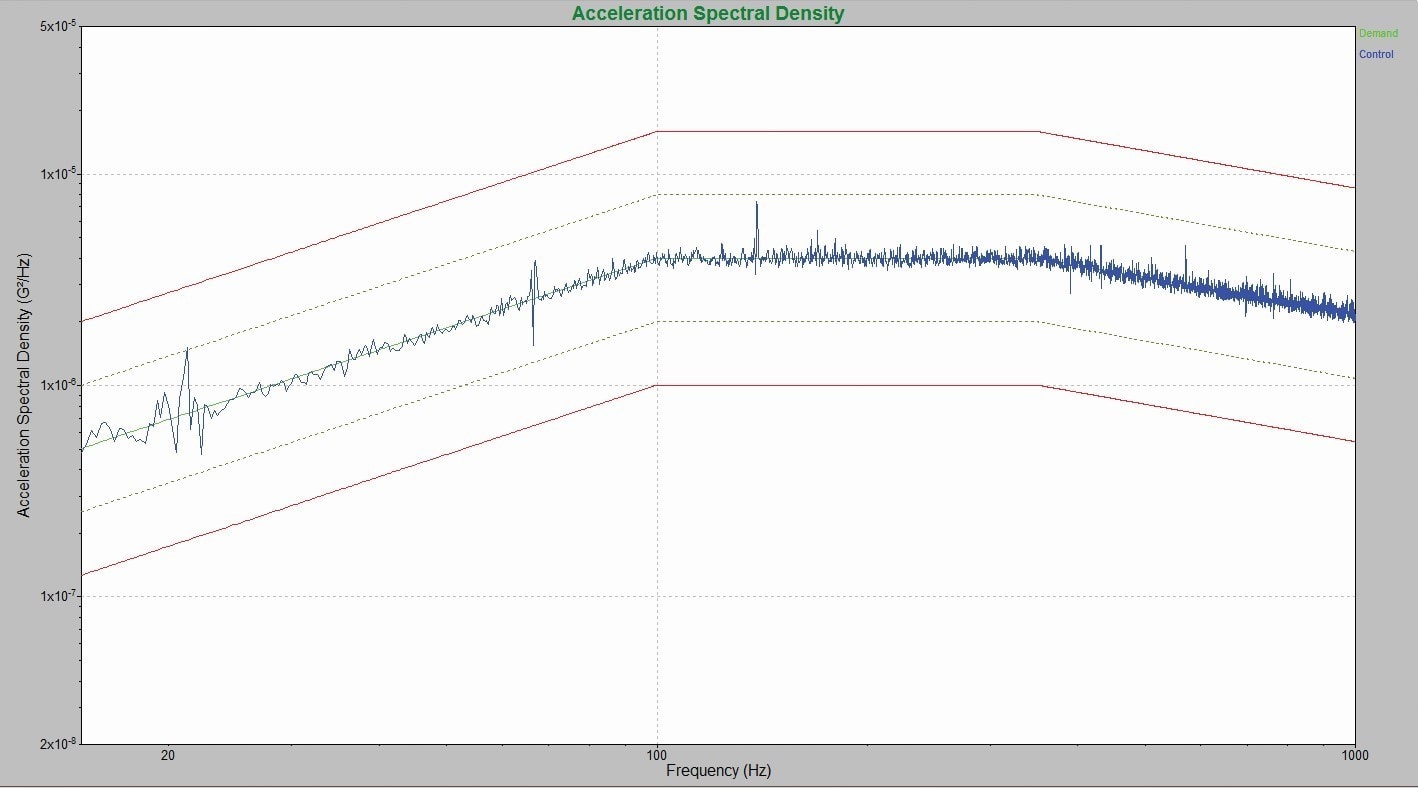 Aerospace random vibration tests often operate on extremely valuable equipment and must be completed within a brief timeframe. Creating a clear PSD that accurately reflects test results is difficult because of the time constraint and the statistical nature of PSD calculation. Two common methods used to address this challenge are Blank Display and Low-level Data Multiplication, but both actually hide the true test response of a DUT.

Fortunately, there is a statistically valid approach to quickly creating an accurate PSD. After a change in level, iDOF promptly reduces the variance of the PSD estimate and exposes any lines truly out of tolerance without masking resonances. Using iDOF, a test engineer can verify that the control PSD is maintained within tolerance throughout the test and make an informed decision on how a test is affecting the DUT. Most importantly, the engineer can stop a test before the energy from a vibration resonance inflicts damage on an expensive, hard-to-replace DUT.

Sidebar
The Statistical Nature of a PSD

The PSD of a Gaussian random waveform is computed using an FFT. The FFT is a linear transform and it is given a Gaussian input. As a result, the output of the FFT at each frequency line is a complex number, with a Gaussian real part and a Gaussian imaginary part. These are squared and added together to get the magnitude, so the square magnitude of the FFT output is a Chi-squared distributed random variable with 2 degrees of freedom (DOF). To compute an averaged, random PSD, F frames of time data are measured, an FFT for each frame is calculated, and the square magnitudes are averaged together. As a result, the averaged PSD of a Gaussian waveform is a Chi-squared-distributed random variable with 2F DOF.