When running a sine test, the main interest is the amplitude of the output frequency or the “pure tone.” Sine tracking filters isolate the pure sine tone generated by the drive output.

Test engineers want to make sure a product is tested with the specified amplitude at the specified frequency. Due to the inherent noise of a shaker system, however, a controller will pick up contributions from noise and harmonics in addition to the pure tone. The background noise alters the reading of the pure tone’s amplitude.

A sine tracking filter is used to isolate the pure sine tone so the controller can obtain an accurate reading of the pure tone’s amplitude and accurately control the pure tone. It is called a tracking filter because it tracks along as the test moves through different frequencies, filters out noise at frequencies of non-interest, and keeps the bandwidth narrow, thereby isolating the pure sine tone at each frequency.

In the example above, amplitude readings at frequencies other than 10 Hz were affecting the test. By applying the sine tracking filters to our test, the noise at 100 Hz (0.5G) and 50Hz (0.3G) is filtered out. At the same moment in time at 10 Hz, the controller now measures 0G at 10 Hz rather than 0.8G and adjusts the drive to output a full 1G at 10 Hz. The test is now producing the desired results.

The above example was a simple explanation to demonstrate how the frequencies of non-interest affect control readings. In reality, the vibration controller makes adjustments based on the average RMS of the defined bandwidth. The following experiment will provide a more in-depth explanation. 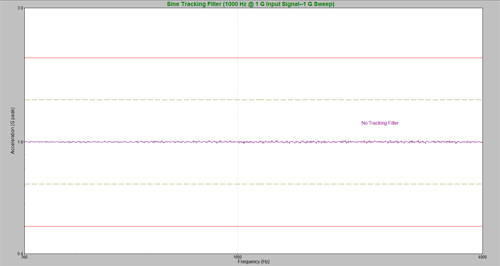 Without a tracking filter, the controller reads 1G over the entire bandwidth during the sweep. As a result, the controller plots 1G at every frequency. There is a 0G output at all frequencies other than 1,000 Hz, but the display shows a 1G reading for all these other frequencies. Why?

As the controller moves through every frequency, it considers the entire bandwidth and not just the frequency of interest. The bandwidth has a 1G acceleration at all times, but the individual frequencies are not contributing any acceleration to the bandwidth (except at 1,000 Hz). 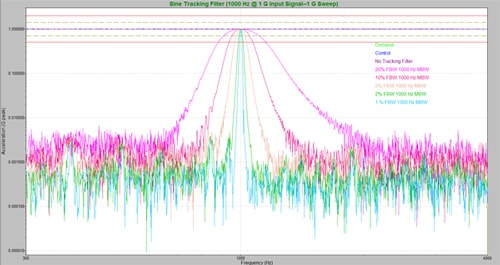 Figure 2. The behavior of a tracking filter at various fractional bandwidths.