Advantage of Higher Lines of Resolution

Lines of resolution are a hardware feature relevant to random vibration testing. For example, the VR95000 controller can control up to 26,000 lines. But how does this value relate to generating a test profile and running the test?

The lines parameter helps define a test’s frequency resolution. A higher resolution makes consecutive frequencies more discernable, which produces more distinct peaks in the resulting graph. However, it takes longer for the controller to process.

Lines of Resolution and Random Testing

During a random test, the controller collects the vibrational response on the shaker table as a function of time. However, random vibration is generally displayed in the frequency domain as a power spectral density (PSD). To generate a PSD, an algorithm combines the response using a spectrum averaging method. The steps of PSD averaging will help explain the function of the lines of resolution parameter in random testing.

First, the algorithm divides the time-history data into frames of equal length. Then, it applies the fast Fourier transform (FFT) to each frame to transform the data into the frequency domain.

Along with the sample rate, the lines of resolution determine the width of each frame of time data. A higher lines value creates wider frames—or frames of a longer time, where each has more data.

Next, the algorithm determines the power value of each frame of frequency-domain data (or “frequency bin”) by calculating the squared magnitude of each frequency point. It then calculates the average power spectrum of the frequency bins and divides it by the sample rate to normalize it to a single hertz (Hz). The result is a single PSD for the time-history data.

Figure 3. The process of PSD averaging.

Advantage of Higher Lines of Resolution 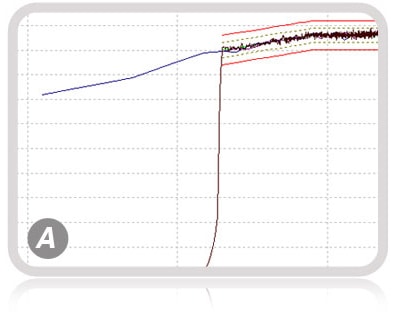 First, higher lines of resolution offer low-frequency control. A limitation of all vibration controllers is the control roll-off, which is approximately 6dB between frequency lines. Control roll-off refers to how quickly the control excitation drops outside the test parameters.

As low-frequency energy is near a shaker’s displacement limits, a sharp roll-off requires up to 20% less displacement from the shaker. Graph A illustrates the difference in roll-off between the blue trace at 400 lines and the red trace at 26,000 lines. 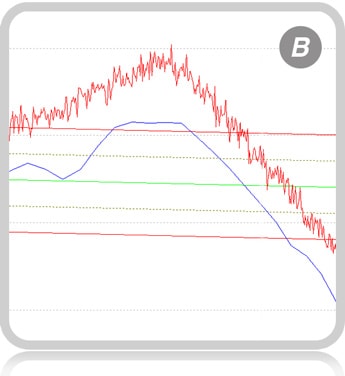 Secondly, a test with higher lines of resolution offers better control of sharp resonances. For the most accurate control/excitation of resonances, a minimum of three resolution bins should exist at the 3dB frequency bandwidth of the resonance.

Vibration controllers can control a closed-loop test to a certain number of lines of resolution. Increasing the number of lines allows better control of low frequencies and sharp resonances but makes the controller start and respond more slowly to changing system dynamics.

If you’re interested in learning more about vibration controller features, we suggest reading What to Look For in a Replacement Vibration Controller.