Many people have asked what the GMW14201 specification is and what is needed to perform a test that matches this specification.

The GMW14201 specification is a rotational vibration measurement test implemented on inside and outside automotive rearview mirrors. It is designed to measure the rotational response of a mirror when subjected to vertical input vibration. 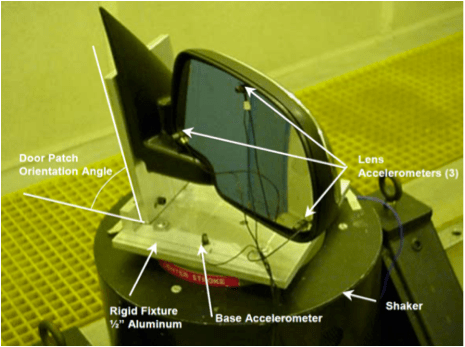 The distance between each of the accelerometers is entered into a form in VibrationVIEW for later calculations. The mirror assembly is then mounted to a rigid fixture that is mounted to the head of a shaker. The mirror is then shaken vertically by using a random vibration profile specified by the GMW14201 specification. While the test is conducted, VibrationVIEW records the values of each of the input and response accelerometers at a high sample rate. Note: recording waveform data requires the RecorderVIEW option on the VR controller conducting the test.

The MATLAB script mentioned before outputs a series of graphs. One is “Transmissibility vs. Frequency”: 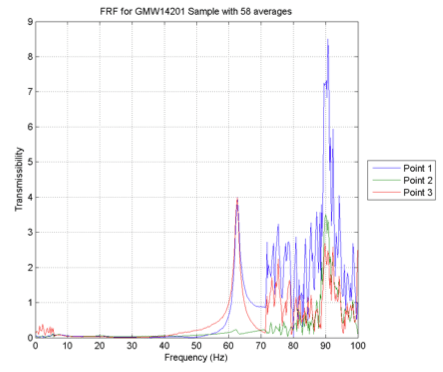 And another is “Rotation vs. Frequency”: 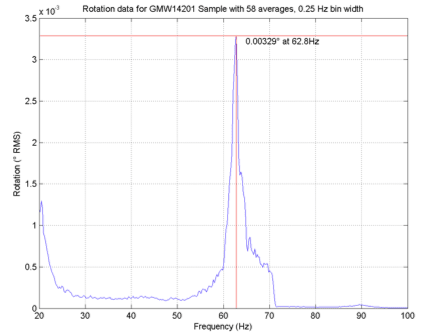 The GMW14201 specification can be conducted with any capable hardware and software combination by following the details of the specification. However, it is much easier to carry out the test by using VR’s hardware, software, and custom MATLAB script. The following list includes the recommended tools for conducting the test: