During fatigue testing, a shaker must be able to excite the entire frequency range of the device under test (DUT). When testing components with extreme, high-Q resonances, such as the turbine blade for a jet engine, AF (acceleration-frequency) control can be used to validate the amount of fatigue applied to the DUT during testing. AF control uses the unit m-Hz (meter*Hertz).

When should the AF control be used? How do you select the m-Hz unit?

When should the AF control be used?

The m-Hz unit was added to VibrationVIEW upon request from a customer for turbine blade testing. It is a value defined by the customer for the maximum allowed stress for engines or engine blades. In most instances, it is not necessary to use the m-Hz unit unless testing turbine blades. That being said, we’ve provided details on the unit below if you’re interested in learning more.

AF control is most often used when a device under test has a high-Q resonance. In some cases, the resonant frequency may shift when compared to the real-world application and can yield different responses in the product. The shift is usually attributed to the rigid fixturing of the product to the shaker table. The AF control technique applies similar stress to the product even though the characteristics of the resonance are affected by the testing environment.

A high cycle fatigue test is used to excite a product’s resonant frequency at a high amplitude for a set number of cycles or until failure. The AF value at failure can then be used to validate the predicted fatigue strength compared to experimental data.

Sine Resonance Tracked Dwell (SRTD) is the test module used to control the test. AF “control” is the unit being used as it is easier to compare to some model generated.

In VibrationVIEW, a constant acceleration, velocity, or displacement can be defined in a different AVD unit than the test profile. During phase tracking, the controller adjusts the output amplitude, phase, and frequency to track and maintain peak transmissibility between the control and response sensors. The fixed AVD SRTD control feature is included in version 2020.1.

How do you select the m-Hz unit?

With constant AF test control, the fixed velocity can be specified in unit m-Hz. The unit was implemented based on direct feedback from customers.

In VibrationVIEW, click Configuration > Units and select m-Hz as the unit for velocity. 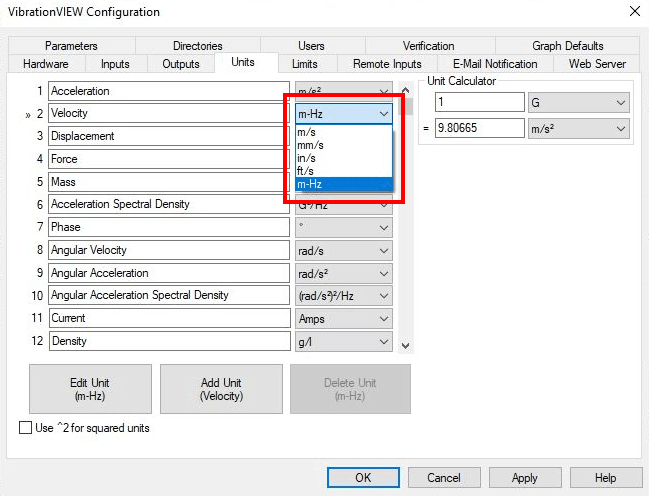 From there, the m-Hz option will be visible on the resonance table. Additionally, if a fixed dwell amplitude in acceleration, velocity, or displacement is set, the control will follow the new setting instead of the original sweep profile.

The m-Hz unit is similar to a velocity measurement (m/s). It is used to validate a predicted failure and compare it to an actual failure generated through an SRTD test.