This tech-note delves into the details on using a response channel to develop a new demand test profile for random. This function is useful in many applications and the one discussed below uses a combination of accelerometers and microphones for control and monitoring.

The question has been raised in the past on the ability to control a vibration test with something other than accelerometers. And, an even deeper question has come up on how to generate a new test profile (demand) based on the response of a monitor signal that may or may not be an accelerometer.

The specific question being covered relates to the desire to do circuit board HALT/HASS type testing in an acoustically driven vibration test chamber. The key to this testing is to get the required vibration levels on the circuit board by means of controlling the sound.

The method described below uses an accelerometer on channel 1 as initial control and a microphone on channel 2 as response. The idea is to “capture” the spectrum of the response channel and make a new test profile and then control the test using the microphone. This application is very useful in circuit board testing where HALT/HASS type testing is sometimes done with acoustic test systems. The first sample is tested with a lightweight accelerometer or laser vibrometer to get the desired vibration on the circuit board and then the sound profile is generated based on the microphone response. Once the sound profile required to produce the desired vibration is determined, the test technician can quickly remove and replace test samples without having to mount an accelerometer. This is a great test method for a high volume or production test environment.

Step 2
The desired vibration profile is entered and set to control on Channel 1.

Step 3
With the accelerometer mounted and the microphone properly placed, the test may now be started with acceleration control. The test should be allowed to run for a short period of time to achieve good control within the tolerances of the acceleration profile.

Step 5
Again, while the test is running under acceleration control, the new test profile may be generated by clicking on the Test menu and selecting Generate Random Profile and then selecting From Ch2. Or, the shortcut of Ctrl+2 may be used. This functionality is part of the Random Import software option (not standard with RandomVIEW).
The figure below shows the new test settings with the automatically generated breakpoint profile in the microphone units (Pascal’s^2/Hz). 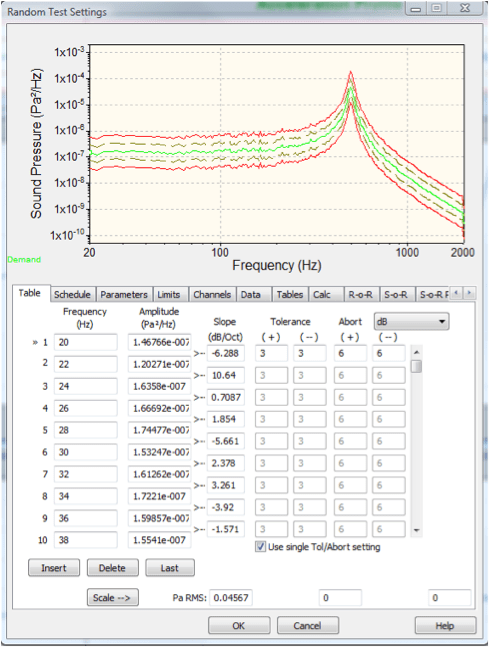 Channel 2 will automatically be selected as the control channel in this new test profile. 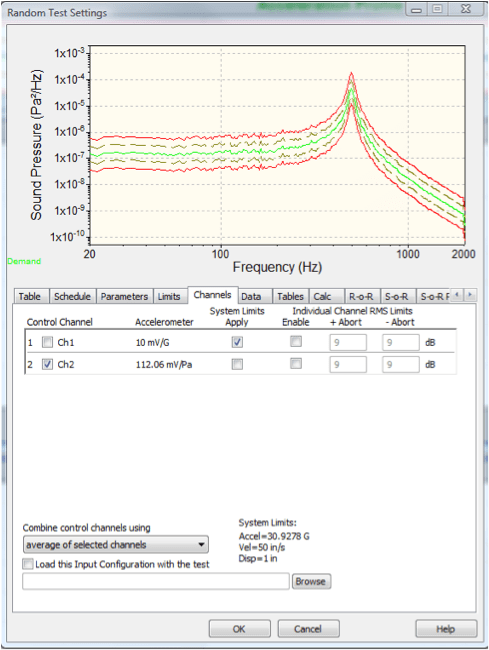 Step 6
The new test profile is saved and now may be used to run the vibration test with acoustic control on channel 2.

Another application for this type of test profile generation is when an accelerometer can’t be placed on a certain area of a test sample during the “real” test, possibly due to heat being applied or a component being electrically “hot” during testing. In cases like this, Ch1 can initially be placed at the point of the desired vibration level and Ch2 can be an accelerometer or other sensor in a “safe” area that can be used as control later.