A random spectrum is defined as a set of frequency and amplitude breakpoints, like these: 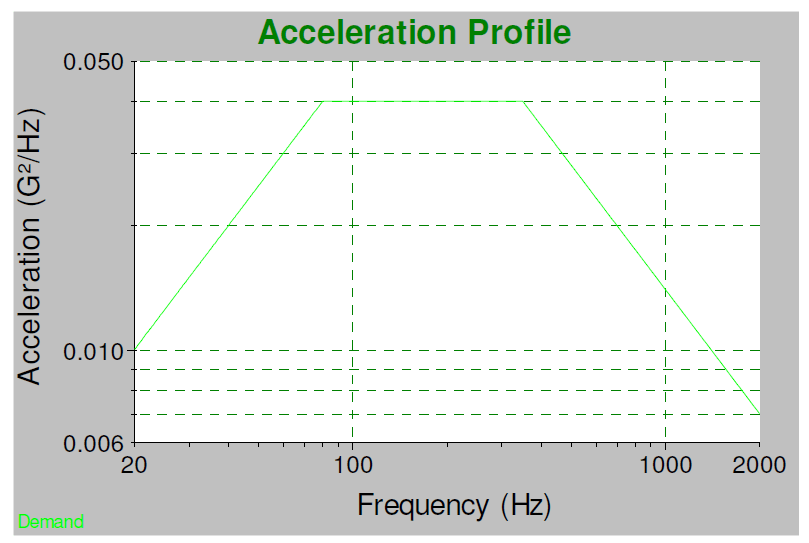 To compute the RMS values from these breakpoints we need to compute the area under the curve defined by the breakpoints. At first glance this appears simple because the area can be split up into a group of squares and triangles, which are easy to compute. But note that the triangles are the result of straight lines on log-log graph paper, and not on linear graph paper. We can still take advantage of the triangles, however we need to use a special formula for computing the area of triangles on log-log graph paper.

The definition of a straight line on log-log graphs between two breakpoints (f1,a1) and (f2,a2) is a power relationship, where the slope is the exponent, and the offset is the multiplicative factor.

The slope and offset that define this straight line, are computed as follows:

Given this slope and offset we can integrate from f1 to f2 to compute the area under the line.

When slope=1 we have a special case where this formula doesn’t hold. For this case we note that a = offset / f which integrates to a natural log function. (Hint: some programs, including Microsoft Excel<sup>TM</sup> define the log() function as a base-10 logarithm, and define the ln() function as the natural (base-e) logarithm. Be sure to use the correct function in your calculation. As a test, for a natural logarithm, log(2.71828182845905) = 1.0.)

So, for each pair of breakpoints we can use equations (4) or (5) to compute the area under the curve. The total area under the curve will then be the sum of the individual area calculations between each pair of breakpoints, and this sum is the mean-square acceleration. We take the square-root of the result to get the RMS acceleration level. Using our example breakpoints, the sum is computed as follows:

The RMS velocity can be computed in the same manner; however the breakpoint numbers need to be converted from acceleration squared/Hz units to velocity squared/Hz units, with appropriate unit conversion, if required. This conversion is done using equation (6) which defines the relationship between velocity and acceleration for a sine wave of a given frequency.

As a result, the equation for the lines connecting the breakpoints, in velocity density, becomes

This can be integrated from f1 to f2 to get the area under the velocity line.

When slope = 1 we need to use a natural log function.

Then we can sum the areas as before to get the mean-square velocity, and take the square root to get an RMS velocity value for the random spectrum. Also, when using acceleration units in G’s, you also need to apply a conversion factor to get a suitable velocity unit. Common conversions are to convert G’s to inches/s2, or to m/s2.

Using the previous example, the RMS velocity is computed as follows:

As a result, the equation for the lines connecting the breakpoints, in displacement density, becomes:

Now we can integrate this from f1 to f2 to get the area under the displacement line.

When slope=3 we need to use a natural log function:

Then we can sum the areas as before to get the mean-square displacement, and take the square root to get an RMS displacement value for the random spectrum. When using acceleration units in G’s, you also need to apply a conversion factor such as defined in equation (10) to get a suitable displacement unit.

Using the previous example, the RMS displacement is computed as follows:

Now it is important to know that this is simply the typical peak-to-peak displacement value. This peak value will occur relatively frequently during your test, so you will often see peaks at this level. But you will also have occasional peaks at levels higher than 3·RMS. How high those peaks get can only be defined in terms of probabilities, so the appropriate question is not how high the peaks are, but how often the peaks will be that high. For Gaussian random data, the amplitudes will be above 3·RMS 0.27% of the time. They will be above 4·RMS 0.006% of the time. And there is still a 0.0000002% chance that you can get a peak greater than 6·RMS. This is very small probability, but not impossible! In practice you should have 30% to 50% of headroom above the typical peak-to-peak displacement value for the occasional higher peak levels.

Sine-on-Random tests have a background random vibration, with one or more sine tones added over top of the background vibration. The background random levels are computed the same as for standard random, as described above. The sine tones then add to the random in the mean-square, which simply means you take the all of the RMS levels, square them, add them together, and take the square root of the result to get the overall RMS value. Since the sine tones are usually defined in terms of their peak acceleration, they need to first be converted from peak to RMS, which for a sine tone is as simple as dividing the peak value by

Velocity works the same way, remembering to convert the acceleration to velocity using equation (6), and then converting the result to the appropriate velocity unit. When summing the squared values, be sure the units for the background random and the sine tones match.

Displacement would work the same way if we were interested in RMS values. To get peak displacement, however, we note that the peak-to-peak sine displacement will be 2