What is a Sine-on-Random (SoR) Test?

SoR is a mixed-mode test with sinusoidal vibration superimposed on a random background. The sine and random vibrations are performed simultaneously to simulate a service environment where both modes are present. 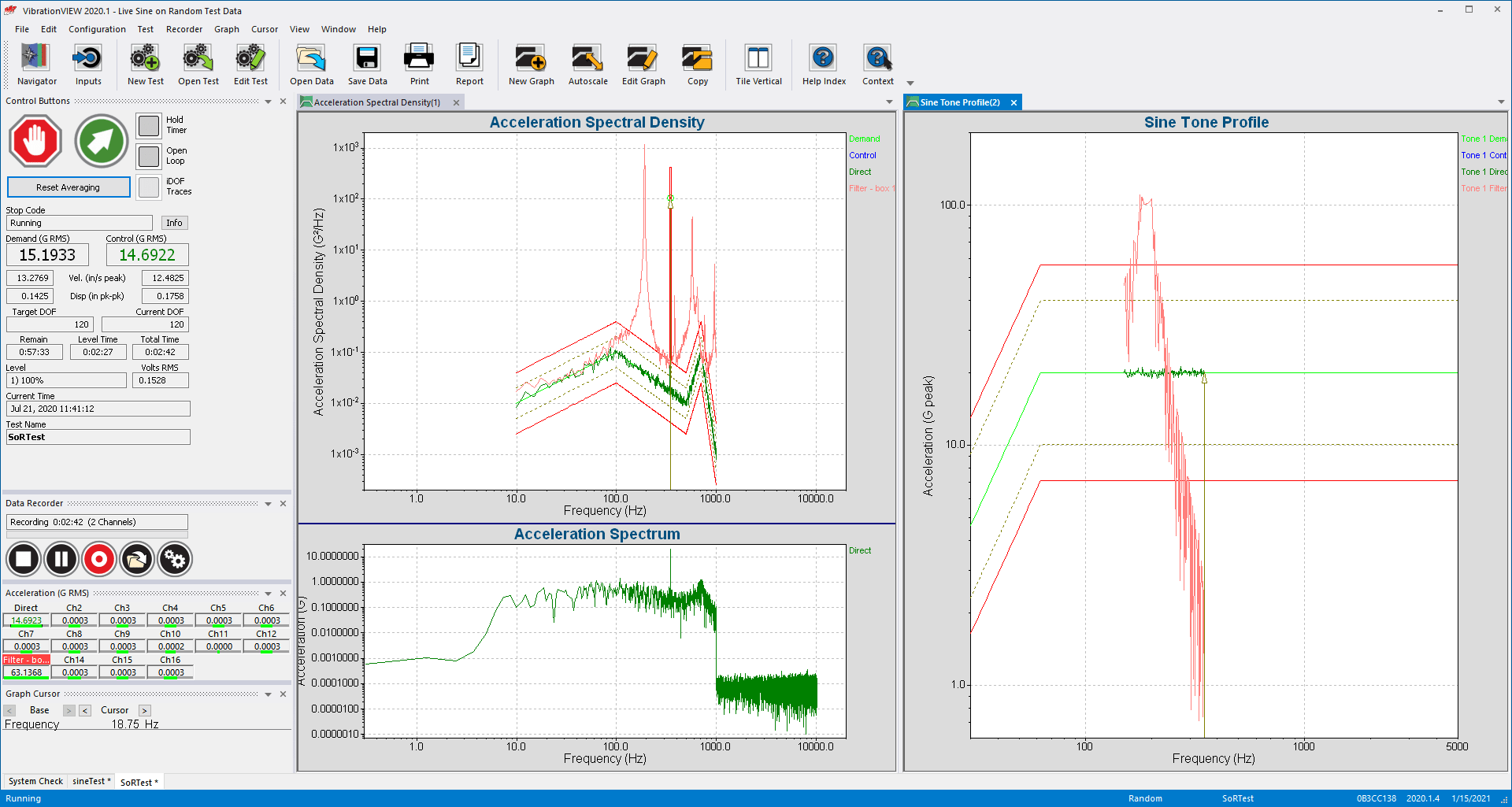 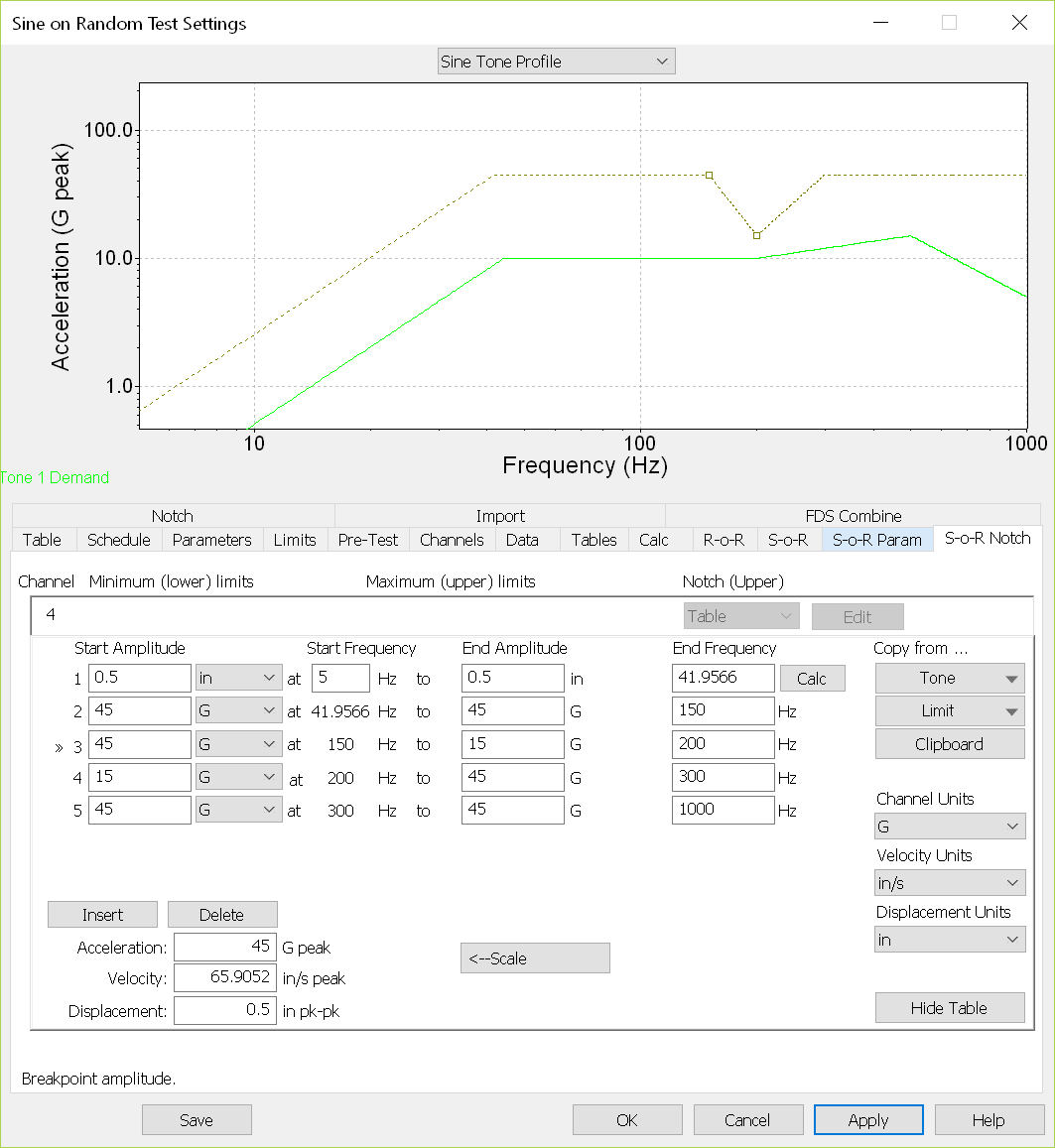 In an SoR test, the background vibration is generated in a random form. However, any sinusoidal vibration present that exceeds the acceleration of the random profile must be included in the test profile to provide the most accurate representation of the in-service environment.

In VibrationVIEW, you can define individual control channels, notch profiles, tuning parameters, and tracking filters for each tone.

Enter the frequency or amplitude breakpoints of the background random acceleration spectrum in an easy-to-read tabular format. Alternatively, enter one endpoint and the desired dB/octave slope. VibrationVIEW supports over 1,000 breakpoints, suitable for virtually any test specification.

One to 32 floating-point precision sine tones can be superimposed on the background random spectrum and swept back-and-forth between frequencies at a user-programmable rate. The amplitude and frequency sweep parameters are also user-programmable. VibrationVIEW supports over 200 breakpoints, suitable for virtually any test specification.

A second output channel to supply a synchronization signal of the first sine tone.

When to Use SoR?

An SoR test should be selected when sinusoidal vibration affects the underlying background random. For example, all aircraft, whether fixed wing, rotor, or rocket-propelled, have a base random energy inherent when in service. There is also a sinusoidal element present that cannot be omitted from a test. It typically derives from the turbine engine or rotor blade and is present at various frequencies.

Most of the components in an aircraft benefit from mixed-mode testing. Instruments, connectors, batteries, and other aircraft components are subject to both sinusoidal and random vibrations simultaneously and to failure from these vibrations. For this reason, Sine-on-Random is the best application for testing components in many aerospace and similar applications. 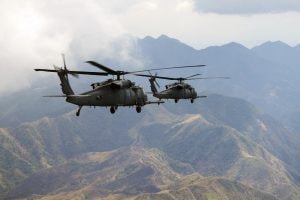 A common and harsh application of SoR testing is the helicopter gunfire test. The helicopter is subject to common random vibration, but gunfire from the helicopter introduces a noticeable high g sinusoidal vibration into the environment. Devices that have only been tested using one method or the other may, at first, appear to withstand the new environment created by the gunfire. As the SoR testing method better represents real-world conditions, it would be the preferred test procedure.

How to Establish the Correct Profile?

There are two common methods to consider in establishing an SoR test profile. The first is to run the requirement as the test specification describes. Standards, such as MIL-STD, are applicable and easy to use no matter if the device under test is used in a military or civilian application. Also, many test articles are the same or similar whether used in a military or civilian environment.

The second method for determining an SoR profile is to record field data. With several analysis tools, the user can establish the test characteristics required to create an applicable test profile. This second method is more complex, and the analysis requires substantial tools and skills. To address these drawbacks, Vibration Research developed Sine Tracking, Analysis and Generation (STAG).

Create an SoR test with recorded data using Sine Tracking, Analysis and Generation (STAG). STAG generates SoR tests reflective of environments with dominant rotational tones that are rendered as sine tones on a shaker table. STAG is a real-world evaluation for products that may experience these dominant sinusoidal components, such as engine components.